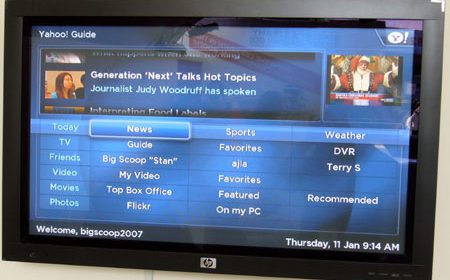 If you're waiting to hear some news about Meedio, sorry, but this isn't it. Yahoo!'s a weird company, they buy a great HTPC software package, and then completely let it die, and then develop their own stuff that could have easily been incorporated with what they had. Go figure.

I assumed the other flat panel would have Go TV — You know, the PC DVR software based on Yahoo’s acquisition of Meedio.
Instead, they were demoing “My Channel” which they call a prototype at
this point. While My Channel does include DVR functionality (guide,
recording, live tv), the emphasis is on community and personalization
(think Flickr, friend invites). Like Go TV, the software is PC-based
and can be controlled via remote.