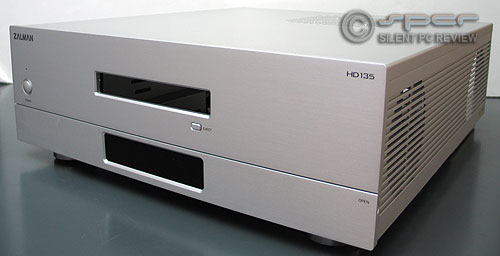 Ok, so my first take on this somehow ended up blank. Anyhow, Zalman really falters on this case with so many vents & fans. It's a shame, as the aesthetics of the case are great, I personally really like the design & style, but you just can't release an HTPC case that clocks in at almost 40db!!

The HD135 is flawed by poor airflow design, badly executed vents, and as is
so common with Zalman, poor stock fans. Zalman's decision to use a pair of thin,
low pressure, noisy, 80mm fans without providing mounting points for any other
fans is disappointing. Many of the vents look perfectly capable of accepting
a 120mm fan, if there was only an easy way of mounting one. As our quick experiment
proved, the problem with the HD135 isn't a lack of airflow vents; it's the means
of pulling air through them that's missing.