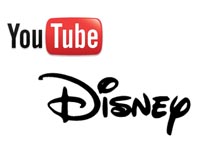 We recently commented on Roku adding a Disney channel to its little streamer and the importance of being able to put the Disney brand on the box. Even when the content is not particularly compelling, the brand alone is enough to attract the attention of parents and children. YouTube may be counting on the same effect as YouTube and Disney are teaming up to produce exclusive, original videos. At the same time, Disney gets to put its content where all the cool kids hang out. As a parent, I have to wonder how this is going to work out. Are you interested in letting your little one cruise YouTube in search of the Disney channel?

The deal, set to be announced on Monday, is small on its surface: Disney Interactive Media and YouTube, a division of Google, will spend a combined $10 million to $15 million on original video series; those shorts will be produced by Disney and distributed on a co-branded channel on Disney.com and YouTube. The channel will also include amateur video culled from the torrent uploaded to YouTube daily