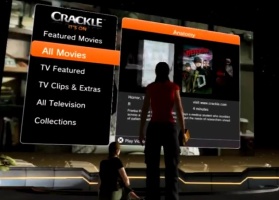 Sony builds the PlayStation 3 which comes with PlayStation Home, the virtual hub where gamers can gather to play games, chat, and hang out while watching movies and listening to music. Sony also owns Crackle, a media streaming service that primarily serves up movies and TV shows produced by Sony Pictures Entertainment. Sony Pictures Loot, the internal Sony group in charge of finding and creating content for PlayStation Home has hooked Crackle up to beam movies into special LOOT EOD theaters that have been established in PlayStation Home. Now, I’m not one to look a gift horse in the mouth, but how is that Crackle and PlayStation Home didn’t hook up sooner?

PlayStation Home is proud to announce the release of Crackle on all LOOT EOD Screens this week. Now you can watch hundreds of full-length Hollywood movies and thousands of television shows with your friends for free. The LOOT EOD Screens can be found in the LOOT EOD Theater, Sunset Yacht, and the Hollywood Hills House.