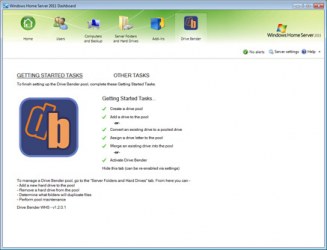 Drive Bender was one of the first pooled storage add-ins announced and one of the most promising. As of version 1.2.1.0, Drive Bender is available to the public.

Drive Extender was the source of a nasty data loss bug, a giant no-no for a server, and the source of persistent performance issues, so I remain somewhat nervous about these pooled storage add-ins. Although the loss of Drive Extender was a disappointment, I have to admit that I really haven’t missed it that much.  I am looking forward to testing out Drive Bender and its ilk on my test server, but for those of you running only a single production server, it might be worth waiting for some reviews before committing to one of these new add-ins.