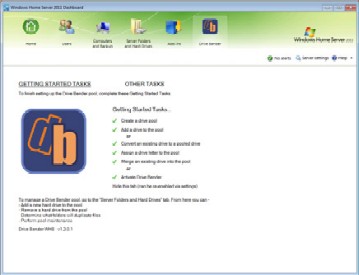 Drive Bender was released a couple of weeks ago, making it the first commercial add-on to bring drive pooling back to Windows Home Server. The original WHS Drive Extender was sorely missed in WHS 2011, but it had its fair share of issues, so any third-party solution looking to bring that same kind of low-level functionality has to be approached with some trepidation. Unfortunately, it sounds like Drive Bender might need a little more time in the oven before we can evaluate how well it works. The screenshots I had seen were promising, but seeing the add-on in action tells a more complete story.

As the dashboard reports this as what I would “believe” to be an existing drive, it might perhaps make sense to use the second option.  From a user standpoint, I should not have to make this distinction.  As the addition of a drive to the pool is supposed to be non-destructive, these options should be combined into one simple option: “Add a drive to the pool” and have the program determine which path to proceed inside the program.