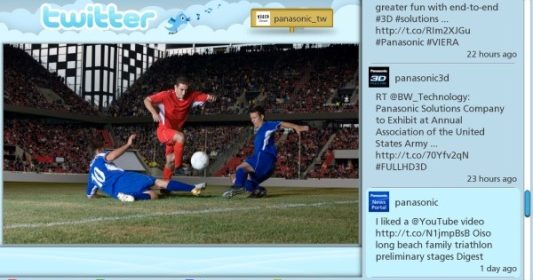 Smart TVs are all about bringing the world of apps to the television set, and Panasonic’s smart TVs are no different. Panasonic recently announced some new apps, but the most interesting app was their upgraded Social TV app.

Panasonic’s Viera TVs have included social apps for a while, but its latest upgrade brings an integrated Social TV app designed to let viewers access Twitter and Facebook streams without totally covering up the action.

I don’t know that Panasonic is the first to take this approach, but it is the first that I have heard of and seen a screenshot of, and in many regards Panasonic looks to have nailed how to bring social media into the living room. I’m personally not social enough to use such an app, but I know many people who are and in most cases they are exactly the kind of folks that smart TVs are being marketed toward. Anyone else interested in posting a tweet while watching Desperate Housewives?