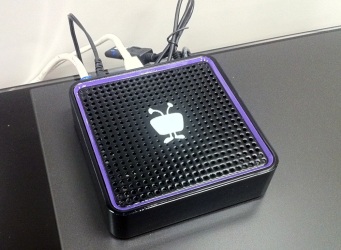 TiVo is already pretty busy this week rolling out their multiroom streaming update for the TiVo Premier, but it sounds like they still made time to show off their latest gizmo at CES. TiVo has a prototype transcorder device that will stream recordings from a TiVo Premier to the TiVo app on the iPad. In and of itself this would be good news for iPad-toting TiVo users, but there are an awful lot of grander possibilities to contemplate for such a device involving streaming for other devices and live TV streaming, assuming of course that the transcorder device makes its way past the prototype stage. It’s also not hard to imagine TiVo releasing the device for current TiVos, and then working to integrate it into future TiVos as an upgraded feature.

Of course, it’s easy to imagine expanding the feature set here: we pushed for details on streaming live TV as well as streaming video outside the home (like Slingbox) and were told it’s all under evaluation, but nothing is locked in yet. That would be a pretty ideal package, especially combined with the quad-tuner TiVo Premiere Elite: you’d basically have access to your TV from anywhere in the world, and you’d only lose one tuner while watching live TV — leaving the other three to keep recording your shows.