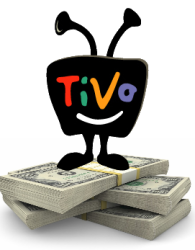 TiVo has established a brand that is virtually synonymous with DVRs, but has always struggled to capitalize on that brand recognition with consumers. Fortunately, the company has not only built up brand cachet, but also a sizable patent portfolio, and that patent portfolio has been quite useful. In the last couple of years TiVo has forced some big companies to settle patent infringement lawsuits. Last year it was $500M from DISH/Echostar and then another $215M from AT&T. This week, TiVo forced Verizon to cough up some cash. Verizon settled with TiVo for $250.4M. As with the AT&T and DISH/Echostar settlements, there is also a whole lot of patent cross-licensing and marketing agreements bundled in with the settlement, so the possiblity of some Verizon-Redbox love coming to TiVo at some point definitely should not be too surprising. At the same time, be on the lookout for further settlement news as TiVo’s continued success has got to be making companies still facing lawsuits from TiVo such as Motorola and Cisco nervous.

TiVo announced today that Verizon will pay it a total of $250.4 million in compensation through July 2018 in order to settle an ongoing patent dispute between the two companies. The companies will also be looking at future combined distribution of streaming video services through Redbox, of which Verizon has a key stake, and TiVo’s DVRs.