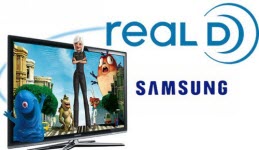 Samsung and RealD are splitsville. Samsung and RealD were showing off their RDZ technology at CES this year and officially announced a manufacturing partnership back in May. The idea behind RDZ or ZScreen was that that TV viewers could use passive glasses because the active shutter element would be built into the LCD screen itself, all without compromising 2D performance. Indeed, there was some expectation that one could use the same RealD glasses at home and at the theater. Between falling TV prices and stumbling economies it’s not hard to see where Samsung might have been wary of trying to push a new, more expensive 3D technology into its panels. Any bets on who might be willing to step in and work with RealD in Samsung’s absence?

In its Q2 earnings report released yesterday, RealD confirmed that the agreement fell through since Samsung’s “initiative to manufacture panels… is not being pursued.” RealD did say it’s decided to explore “other potential partners,” for the ZScreen technology but it has yet to offer any specifics.