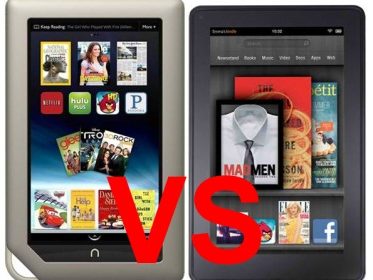 As we all know at this point, Amazon announced their first proper tablet, the Kindle Fire, at the end of September. Based on Android and built to tie into the collection of services that Amazon has built, there was a lot to like about it, especially its $199 price tag. Much was made of it as an iPad competitor, but in size and price, it more directly competes with the Barnes & Noble Nook Color. Amazon had little to say at the time about what kind of apps the Kindle Fire would run, but the general assumption was that the Kindle Fire would be largely limited to Amazon’s cloud services for media consumption. Even so, the Kindle Fire was very definitely a media consumption tablet that also acted as an e-reader while the Nook Color was an e-reader that could also run some tablet apps; it wasn’t set to be much of a competition.

Barnes and Noble just announced its Nook Tablet with plenty of content coming along for the ride. Most notable is Netflix integration, described by B&N as the deepest on any tablet with Netflix recommendations getting pushed to your homescreen. B&N calls the 7-inch tablet an “unrivaled portable content machine” and backs up the claim with preloaded Pandora and Hulu Plus services (and free trials). Flixster with UltraViolet is also coming soon with newly released movies and TV shows from Warner Bros. and others.

The Kindle Fire remained a formidable entry to the tablet market, but for a short time it appeared that Barnes & Noble might have fielded a true champion. That is, until Amazon decided to share a bit more about the Kindle Fire.

Earlier this week Amazon responded with a lengthy list of apps that will be available to download from the Amazon AppStore at launch time, including Netflix, Rhapsody, and Pandora. Today, Amazon continues to add to that list with the announcement that Hulu Plus and ESPN ScoreCenter will be joining several thousands other apps that will be available on Kindle Fire beginning next week.

— there will be 100 enhancements in all, according to Barnes & Noble. Central to the upgrade is content from top-tier content streaming sites like Hulu, Pandora, Grooveshark and MOG. Looks like it’s not time to count the Nook Color out just yet.

The second advantage is goodwill. The Nook Color has been a darling of the geek community for the ease with which it can be hacked to support standard Android apps and the neutral to supportive stance that Barnes & Noble has taken with the community. Spec-wise the Nook Tablet stands to be an even better Android tablet on the cheap and will likely garner even more hacking interest. Only time will tell if Barnes & Noble continues to approach the community in the same manner.

While B&N has turned its back on the hacking done on the original Nook Color, it might have a different view on this now that content deals with third parties are in the picture. There is also that free support in B&N stores that was announced. Hacked tablets are not going to sit well with B&N dishing out free support.

Does Barnes & Noble have what it takes to stand up against the Kindle Fire onslaught?