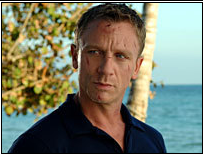 If I was lucky enough to have a next gen DVD player, I would likely pick up The Departed and thats about it from this latest bunch of releases. Sure the HD goodness is nice, but it isn't quite enough to make me pick up a movie. If I want pointless HD fun I will go watch HD New or Discovery HD :).

While you are trying to figure out which new releases to add to your library. You will also note they have an article up about Sony's latest effort to increase PS3 sales in Europe. Rather then stick with Talladega nights, which was a flop from a HD stand point, Sony has moved to Casino Royal. Casino Royal, the new Bond flick, will be on a BD-50 disc and feature 1080p/AVC and a few other extras. Its always best to show case your hardware with good software. Good decision on Sony's part.

Sony's gamble of an overprice console but underpriced Blu-ray player may in fact be helping them. Combined with strong studio releases so far this year, they seem to have a lot going for them. I hope they get together with a decent Media Center company and develop software to truly round out what the PS3 has to offer. I have suggested it once before, why not take over a small company like Sage or BTV and let them develop a nice Media Center GUI to compete with MS? If you can install Linux, you can just about do anything you need it to do.  Send me an email if you have seen or heard of any stories of home brew media center success.

Sure, they may have had to wait a while, but in our opinion, our
European friends are getting a much better deal than us lowly U.S.
consumers received back in November when the when the company packed
the first 400,000 U.S. PS3 consoles with a slimmed down, BD-25
single-layer version of the Will Ferrell hit 'Talladega
Nights.' Quite frankly, who would you rather see in high-def — the festively
plump Ricky Bobby, or James Bond!?

Hey Sony, how about letting us PS3 owners on this side of the
Atlantic trade in those copies of 'Talladega' for 'Royale'? Just a
thought…