Avast! This be my toaster! 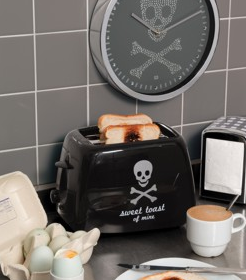 Arrrrr… Are ye interested in a toaster made for pirates? Product Page:

END_OF_DOCUMENT_TOKEN_TO_BE_REPLACED

Well if the idea of play BR titles on a relatively cheap PS3 doesn't get your fancy, perhaps a cheap stand alone player will. Funai Electric, an OEM manufacturer, intends to release Blu-ray players to the market for about $500 a pop later this year. Good news for consumers who are not early adopters and would have paid twice that […]

END_OF_DOCUMENT_TOKEN_TO_BE_REPLACED

modern home theater has a great article up describing what goes into a home automation system. Part one of this two part series gives a great overview of what you can expect before you delve into a home automation build. I am looking forward to part two where they will describe more of the DIY entry-level options available. With a […]

END_OF_DOCUMENT_TOKEN_TO_BE_REPLACED

Thats right folks, Sage has a new release out that is aimed at squashing a huge amount of bugs. For those of you not in the know, Sage is a media center program that operates on Windows, Linux and has a placeshifting client for Mac. It is widley considered to have the best PVR features of the commercial programs and […]

END_OF_DOCUMENT_TOKEN_TO_BE_REPLACED

I wasn't aware of Velocity Micro being an approved CableCard vendor for Media Center PC's but it looks like they are.       Configuring an HTPC with a single digital cable tuner, Blu-ray, and X2-4200+ will run you $3,000. The Blu-ray burner is responsible for 800 of that total. Is HTPC nirvana near? Its close but the shackles of […]