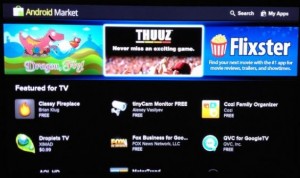 When Google TV launched last year, I had very little interest. The Logitech Revue was the least expensive Google TV device, but at $299 there was no way I could see it competing with an HTPC for the power user or the Roku for entry-level user. It just seemed destined to get squeezed out in the middle. Then the reviews hit. I think the most generous adjective I saw attached to Google TV at the time was mediocre.

When the Logitech Revue’s price was slashed to $99 and Google announced that all of the current Google TV hardware would be eligible for the planned Android-powerd update, my interest was piqued. It’s taken a few months, but Google TV 2.0 is here. Over the air updates for existing hardware should begin on October 30 soon with new hardware in coming months from Samsung, Vizio, and others.

Google’s smart TV software platform, Google TV, is poised for its first significant overhaul since it launched in Logitech and Sony hardware a year ago. Via over-the-air updates that should begin streaming to hardware devices on October 30, Google TV users will find new TV-optimized Android Apps, an improved YouTube experience, and new features that provide easy, direct discovery of TV and movie content.

The original Google TV release faced three major problems. The first problem, price, has largely been resolved by the platform’s poor initial consumer response. The second problem was the UI and it sounds like things are definitely looking better in this new version. The third problem was content access. Many networks almost immediately blocked Google TV’s access to their websites and the streaming television episodes contained therein. It sounds like this problem remains, but with Android Market access there may be another avenue for accessing this sort of content in a manner that content owners will feel that they sufficiently control. On top of that we will probably see the new Google TV become a popular casual gaming platform. Hopes were high for Google TV when it initially launched. Only time will tell if the Google TV platform can recover from the damage inflicted by what many considered to be a half-baked initial offering.