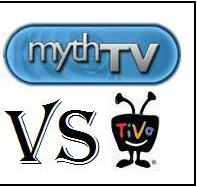 Ahh, nothing like a good old battle of the death to get your morning going. The bad part is, function wise TiVo is already ahead of the game. Having a close boxed system means you can get a lot the functionality such as CableCard support you simply can't get in an open source system such as MythTV. However, if you are satisfied with broadcast HDTV and analog recordings, MythTV and other open source/commercial products are a great alternative to the TiVo.

I am by no means giving a complete rundown of features of each set, just a general observation of what can be done with a closed box. There are certainly many many benefits of an HTPC with MythTV. I am sure John and Lothar can chime in.

MythTV is an open source homebrew DVR software solution that works on a computer
running Mac OS X or Linux. MythTV provides the usual functionality of a DVR
including time-shifting and trick functionality while watching TV. In addition
to storing TV shows on the computer’s hard drive, MythTV’s suite of applications
allow you to build a “mythical home media convergence box”

TiVo DVRs are a marriage of TiVo hardware and TiVo service accessible via
TiVo software. The TiVo service automatically finds and digitally records to a
hard drive every episode of your favorite shows. In addition, TiVo software
provides time-shifting and trick functionality for watching TV. TiVo’s Series 3
includes support for HD programming over a digital antenna or digital cable
using 2 CableCARD decoders.