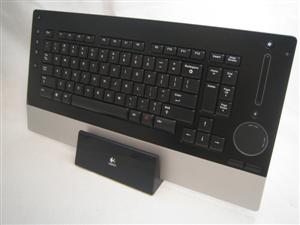 We posted our review of the diNovo Edge a little while ago and although it had its faults, we found it to be a pretty capable keyboard. Although, it is hard to justify spending $200 on a keyboard. They have very similar thoughts as we do. Sexy.. Sexy.. Sexy.. but expensive and the trackpad is a touch annoying.


One major convenience of the Edge is the ability to use it as the sole input device for a media center PC.
The track pad is ideally used with the right thumb, while holding the
keyboard up with the left hand poised near the left click button. One
oddity, though: we found the track pad very difficult to control when
using our index finger, similar to a laptop track pad. Perhaps it is
the comparatively diminutive size of the Edge track pad, but we kept
tripping into the scrolling areas on accident. Another minor missing
feature is backlit keys, which the competing Microsoft branded keyboard
does feature. We have not had a chance to use both side by side, but we
expect power consumption might have played a significant role in the
decision not to include this feature. We hope to see it in future
product revisions.