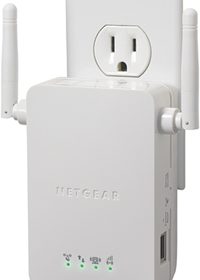 In the last 5 – 10 years wireless has vastly changed how we connect devices to the internet in our homes. Every smartphone, laptop, tablet, media streamer, gaming console has the ability to connect to your network through your wireless access point. Along with the ability to no longer having to run an Ethernet cord everywhere you needed network connectivity, there were short comes. As almost everyone can attest to wireless is not 100% perfect, there is always a corner of your home, or an area in your back yard that your wireless can not reach.

That is where wireless repeaters or “range extenders” come into play, they allow you to extend your wireless coverage to distances greater than your access point at home can do on it’s own. Lately the trend from many consumer network manufactures is bringing to market these range extenders. Today we were able to review one of the new 802.11N range extenders from Netgear, the Netgear Universal WiFi Range Extender WN3000RP.

The Netgear range extender as we get into later on in the review, allows users to bridge the gap between where your wireless network starts to fall apart and where you would like to use your wireless devices but can not.

The Netgear Universal WiFi Range Extender WN3000RP comes packaged in a pretty standard consumer box listing all of its specs, all of the systems requirements, what the device can be used for, and full detail graphics on how the device can be setup and used within your wireless network at home or office. Out of the box you can see the typical Netgear cardboard tray, that securely holds the Universal Range Extender in place. That is one thing that impressed me is for how little is in the box, and how compact it is, the unit it self is fully secure in the cardboard tray insuring it is delivered undamaged. Out of the box you can see the users manual which is pretty sparse, but honestly with this device and it’s setup procedures it is straight forward and that is what most end users will need. The device itself which we will get further into next is small and compact, and has a slight similarity to powerline devices available from Netgear. All in all the device is well packaged, no frills, and straight to the point.

As previously mentioned the Negear Universal WiFi Range Extender is almost identical in size, fit and finish to older power line adapters. The device itself is pretty straight forward, supplied with two 2.4ghz wireless antennas, and Ethernet port to ether setup the device and or to use it as a wireless bridge to connect your wired networking devices to your wireless network. Do you have that Blu-Ray player that only has a wired Ethernet connection that you would like to connect to your wireless network, this device will do just that. One the front of the device you have four status lights, from left to right you have the WPS light (WiFi Protected Setup), it indicates if your wireless connection is secured. The next light Link Rate, indicates a wireless connection between the Universal Extender and your wireless router. The third light is the status light, indicates when your Extender is enabled and powered on. The fourth light, the PC to Extender light indicates when the Extender is connected to a PC (wired or wireless). On the right side of the Extender you find the Ethernet port for configuration or wired bridge access. There is also a factory reset button, WPS automated setup button, and a device on/off button. The back of the Extender you will find the two prong power outlet plug built directly into the Extender. Over all the Extender is pretty simple, no frills, but honestly what else do you need from a wireless range extender?

Advanced Features: Extend internet access for wireless devices through out your home. Repeats 2.4ghz WiFi signal from your wireless router and access point.

The setup is as simple and straight forward as you can get for setting up a wireless repeater of this nature. Simply plug the Universal Extender into an outlet that is on the “fringe” of wireless coverage. The Extender needs to be within acceptable range of your existing wireless router. If the Extender is not within range of your wireless router, the Extender will not be able to connect to your router and extend the connection further. Once plugged in, power the Extender on by using the on/off button on the right side of the Extender. Now here are two possible ways to setup your Extender, if you have a Netgear router with WPS advanced wireless setup and are running the default settings you can perform the automated WPS setup. To perform the automated WPS setup simply push the WPS button on your router, and then push the WPS button on the Extender. The automated WPS will simply setup your Extender to connect to your router with a WPA2 pre-shared key and start sharing the routers wireless connection. Now if you have a router or access point that is not a Netgear and doesn’t support WPS automated wireless setup like I do then you need to connect to the Extender wired or wireless. To connect to the Extender wirelessly simply open up your wireless connection manager on your laptop or other wireless capable device and connect to the SSID (Service Set Identifier) titled NETGEAR_EXT. Once you are connected, open up your favorite web browser and try to connect to any website, you will then be automatically re-directed to the www.mywifiext.net web page. This webpage is the setup page for the Netgear Universal WiFi Range Extender. Follow through the setup on the webpage, click save it will reboot the Extender and then start sharing and extend your wireless connection even further. Once it is rebooted go back to your wireless connection manager on your wireless device and now search for your SSID that you normally use, but this time you will see a new one with the SSID of yours with “_EXT” added onto it. That is the SSID for your wireless Extender. Setup this new SSID and have it automatically connect to it, if you do this, you will have seamless roaming between your default SSID and your extended SSID.

Now onto the device performance, by day I am a wireless network engineer for a major retailer. I have been doing wireless for over 10 years now, from the beginning before 802.11B was even a finalized standard and when both 2.4ghz and 900mhz systems were competing against each other. I have worked in various industries starting out with wireless internet service providers, to the airline industry and now in the retail industry. While wireless is used differently in each industry the one common factor is wireless. So coming into this I was very familiar with how wireless extenders like these work, and how 802.11 B/G/N chipsets work and how they modulate and communicate. Because this device is only a 2.4ghz repeater, the same chipset has to communicate to both your wireless router and your wireless client device at the same time it introduces a performance hit. What I mean by this is network throughput, the speeds as which your wireless client will be able to transfer data across your wireless network. WiFi by its nature is only half duplex, it can not transmit and receive at the same time, if the range extender is sending or receive a wireless packet from the access point, the extender can not send or receive a wireless packet to the router at the same time and visa verse. This is the unfortunate nature of wireless and how it communicates with other devices. Do you have an 802.11N router and an 802.11N client device and is not living up to the advertised speeds? Do you have older 802.11B clients also on your network? If so, the reason you won’t get the advertised 802.11N data speeds is that your B only clients are preventing seamless wireless packet transfers to your N only clients. Your N clients have to fall back to lower data rates while the B only clients transmit packets.

The Netgear Universal WiFi Range Extender is no different than other range extenders in performance. What it makes up for in lack of network performance, is in simple to use setup, and the great looking small form factor. In my testing I ran NetStress network performance tool from my Dell laptop equipped with a 2.4ghz 802.11N wireless adapter which was connected directly to my Cisco 802.11N access point. I ran end to end speed tests from the laptop to my wired desktop over the wireless network to get a good baseline on network performance before I introduced the Extender on my network. I then performed the same throughput tests with the Extender in place and my laptop connected through the Extender. As expected my speeds went from just over 8000KBps when connecting my laptop directly to my access point, down to just over 2000KBps when connecting the same laptop through the Extender. That is a 75% decrease in network performance on my 802.11N wireless network. Most users will find that trying to connect their HTPC or media streamer through the Netear range extender will not perform up to the standards needs for seamless media play back. For simple internet traffic and slight Neflix usage it might get by but for streaming a ripped Blu-Ray it just won’t cut it.

While speed is one factor that many care about range is a whole other factor and that is where this device shines. I setup the Netgear Universal WiFi Range Extender WN3000RP in a second level bedroom in my home, I shut off the access point I have on my second floor and left the access point in my basement on. When I shut of the access point on my second floor, the signal went from -45dB (read as a very strong signal, full bars) to -75dB (relatively weak signal, 1 to 2 bars). I then setup the Extender to connect to the access point in my basement and went through the setup and connected the laptop to connect through the Extender only. My signal again jumped right back up to -45dB, and while I walked around my second floor the signal stayed at a that reading. I then moved outside, again only connecting to the range extender and found that while I was seeing a weaker signal (-55dB, 2 – 3 bars) it was still plenty strong and I was still passing internet traffic. From a wireless signal aspect the Netgear Universal Range Extender performed as expected.

Many things can drastically effect how wireless signals propagate through your home. What channels your router uses, the placement of the wireless router, and possible noise interference issues you may have (cordless phones, microwave ovens, ect..) in your home can all affect how the wireless signal propagate through your home. Range extenders come in handy for those trying to extend coverage beyond the four walls or for those trying to cover multiple floors.

While the Netgear Universal WiFi Range Extender did not hold up to the performance expected when directly connecting a wireless client to a wireless router, it did extend the range of that wireless network as designed. So the question you have to ask yourself is do you need speed, range or both? If you need just range, and don’t care about speed when all you are doing is some simple streaming (non-HD), basic internet traffic, and all you want is to extend the wireless footprint in your home the Netgear Universal WiFi Range Extender just maybe what you need to accomplish that.

Thanks to Netgear for providing the review sample.