Samsung’s 55″ OLED TV Coming to the UK This Spring 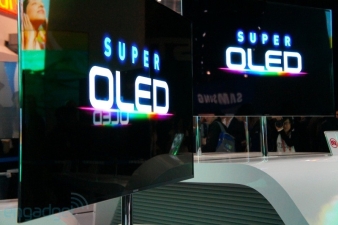 Samsung was showing off a 55″ OLED TV at CES this year. At the time, Samsung was not giving any release dates, but they were aiming for the second half of the year. Well, Samsung still isn’t giving a date, but evidently folks in the UK are going to be getting Samsung’s OLED beauty this spring. Samsung also isn’t giving any prices, though one can assume that it will be lofty. The TV is expected to ship with the full range of Smart TV features and with Samsung’s new active 3D technology. It will be interesting to see if Samsung is able to gain some traction this year with their new big screen OLED TVs given how anticipated the technology has been in this size range.

A recent piece of news stemming from CNET claims that Samsung is preparing to ship its highly-anticipated flagship 55-inch ‘Super’ OLED HDTV this Spring. Unfortunately, the release will be limited to those lucky few residents in the United Kingdom with plenty of saved-up cash ready to expend.