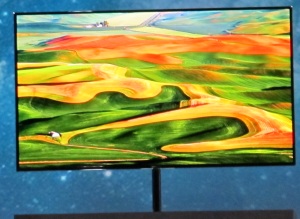 Samsung sure knows how to run a press event, and to be honest it was an easy sell because they announced some amazing TVs (although Panasonic did sure did their best to make 3D and 3DTVs incredible boring, so boring that I’m going to save any comments until tomorrow when I get a chance to see the TVs up close). Speaking of TVs, there were two announcements that were really interesting: first, the 55″ OLED shown here and the 75″ ES8000, which if the reality is anything like the photo shown in the presentation – it will be a incredibly slick looking HDTV display.