For those holding on to an aging HDTV or projector which lacks HDMI support, there are few options in a world where component (YPbPr) output is slowly being stripped away.  In fact, until recently there were only two, the HDFURY II and HDFURY III; but with the lower model starting at $180, neither is a perfect option for the thrifty.  Fortunately, there is now another solution provided by a company best known for their high quality HDMI cables; the MonoPrice HDMI to Component & R/L Stereo Audio Converter (MYCH01 / Product ID: 8125).  With an asking price of $39.92, it is natural to expect some compromise; after all we often get what we pay for.

The MonoPrice HDMI to Component converter arrived in simple but well-designed packaging.  Like the other MonoPrice A/V components I have had experience with in the past, the front flap contains a few magnets, making it convenient to access and store the device without destroying the box.  The device is also plain and functional, offering HDMI and 5V inputs alongside a red LED on one side and analog component + stereo outputs on the other.  Given the straight-forwardness of the device, setup was understandably easy with one point of potential confusion:  the manual points out that power should be applied only after connecting both the input and outputs to their respective endpoints.  Once attached, the converter consistently draws 2.1 watts. 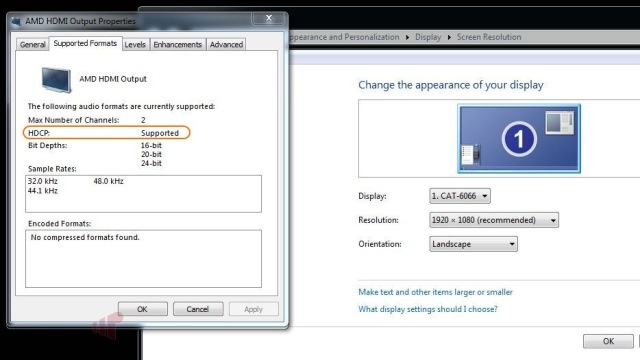 HDCP support is a critical feature, because it is what enables the HDMI to Component converter to be useful when connected to modern HDMI sources like Blu-ray players, TV set to boxes, and even media streamers that provide premium services like Netflix and VUDU.  Clearly, as we can see in the screenshot above, the device handles this requirement perfectly.

Unfortunately, where it nails HDCP support (an arguably more important feature), rendering the picture in the right place and without mangling it, was missed somehow.  As we can see, the results were slightly different on the two displays (Panasonic TC-P58VT25 and TH-C42FD18) that were tested with the MonoPrice HDMI to Component Converter.  One is just off center, and the other picture is clearly unacceptable.  To determine if these results were anecdotal, the original device was RMA’d but both issues were reproducible with the replacement.

Depending on individual tolerance for imperfection and the HDTV used, the HDMI to Component & R/L Stereo Audio Converter (MYCH01 / Product ID: 8125) ranges from annoying to unacceptable.  The price ($39.92) is just about perfect for what it does though, so hopefully these issues can be resolved in “Rev 2”.