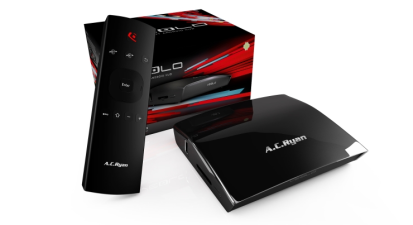 The A.C. Ryan Veolo is an Android 2.2-based media streamer. It supports the usual range of formats and offers the option of accessing the entire Android Marketplace, placing a wealth of media content options, games, and other services on the big screen. The A.C. Ryan Veolo’s implementation of Android is pretty barebones and this review does point out that controlling some apps with the included remote control/keyboard/pointer doesn’t always work out so well. I haven’t personally been convinced that moving to Android for the OS is necessarily a selling point for a media streamer, but if you are heavily invested in the Android ecosystem and want to bring that experience to your living room, the Veolo does seem to have the media chops to meet your needs.

Since the Veolo does not have an internal hard drive, it is meant to stream all the files from the network or play them from an attached storage medium. Testing the device with various MKV based files from 20 to 90 mbps, along with various fullHD clips, the Veolo managed to playback everything without issue. In a normal scenario, the weak spot may well be the network itself, as you will need to have an excellent wireless connection to playback fullHD media for example.