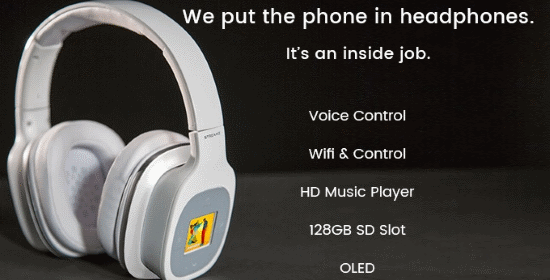 I get a lot of Kickstarter pitches in the MissingRemote inbox, but it’s not that often that I see one that looks interesting. STREAMZ is one of those. Combining an Android powered Wi-Fi streamer in the headset alongside Bluetooth and wired connectivity it can provide a complete music solution. Music can be stored locally (it supports up to 256GB SDXC), streamed from Google Drive, or from Pandora or Spotify. Although, as a Google Play Music subscriber it would be even more interesting if it supported that service. Besides the general risk associated with Kickstarter campaigns, there will be some associated with the platform’s development. If the company makes it, hopefully they will be committed to updates both from a security and feature perspective.

SALT LAKE CITY, JUNE 12, 2017- STREAMZ®, the world’s first voice controlled smart headphones that plays stored and online music without the use of a smartphone is kicking off on Kickstarter June 12th, 2017. STREAMZ features voice control, Wi-Fi, a 1.6 GHz Quad-core Android® processor, HD music player, and a color display. STREAMZ can play stored HD music and from multiple online streaming services including Pandora®, Spotify® and many others without being connected to a smartphone. The internal 4GB memory is expandable with an SDXC Card up to 256GB for a total of 260GB.

Unlike Bluetooth headphones, STREAMZ uses uncompressed Wi-Fi and a built-in 96kHz/24 bit HD DAC to play the absolute highest quality music available in the market today including FLAC, Apple AIFF, WAV and HD music from PONO® and other online HD music stores. STREAMZ also plays standard formats including MP3, iTunes AAC music, audiobooks and Podcasts.  STREAMZ Wi-Fi allows users to stream high quality, uncompressed music over Wi-Fi with a range of 100 meters, which is over three times greater than Bluetooth’s range of 30 meters or via a mobile smartphone hotspot.

STREAMZ unique Auto-Synch feature makes managing and listening to music incredibly easy by automatically and wirelessly transferring music that a user has saved on their iOS or Android smartphone, MAC or Windows PC onto STREAMZ via Google® Drive’s cloud based storage service.

“Most music lovers, audiophiles, commuters and athletes just want to listen to their music without having to mess with their smartphone, apps, cables and Bluetooth pairing,” said Douglas Kihm, CEO, Founder. “We’ve created a solution that provides you complete freedom to instantly and easily listen to online streaming and HD quality music without the need for a separate phone or music player.”

STREAMZ is more than just headphones, it’s a complete Wi-Fi HD music player and storage server that users can wirelessly listen to stored and online streaming music.  Unlike traditional headphones, STREAMZ will be periodically updated with new online App features, thereby making them obsolescent proof. STREAMZ unique 10 band Equalizer (EQ) allows a user to select a range of personally preferred audio frequencies that results in greater clarity and immersive dynamic range.  STREAMZ are designed for mobile use or to rest on a desktop and be used as a complete voice controlled home or office HD quality stereo system by attaching them to an amplified stereo speaker system or an Audio Video Receiver. Streamz also has an audio input jack to connect a music player.

The STREAMZ over-ear leather cushioned headphones are extremely comfortable and at only 13 ounces are lightweight. STREAMZ will initially be available in black and white with more colors to be announced. All models have an integrated 128 X 128 pixel color OLED display, two keypads, a microphone and an integrated rechargeable lithium polymer battery that runs at least 6 hours. There are three ways to play music on STREAMZ including via voice commands, with its color display, or using it’s iOS or Android® STREAMZ App. The STREAMZ App allows you to browse and play music on the headset or streamed from a smartphone plus transfer music and setup hotspots.

STREAMZ is now available on Kickstarter starting with an early bird price of $199.00.  STREAMZ is MSRP retail priced at $449.00 and will be available from retailers worldwide and on the STREAMZ online store beginning September 2017. Click https://goo.gl/XB7EBm to watch trailer.

Streamz Inc.’s mission is to dramatically simplify and enhance people’s entertainment experience with voice controlled, smart streaming media products.  Streamz Inc. is a spin-off of Mozaex®, which over the past 33 years has shipped hundreds of thousands of smart entertainment media products to world class companies including IMAX®, NEC®, Gateway® and hundreds of dealers in over 35 Countries.