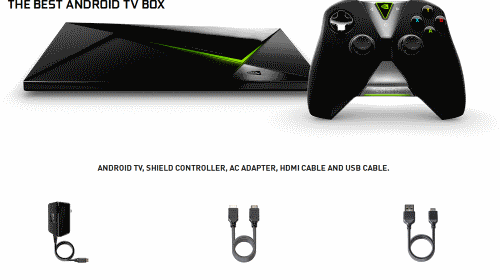 Let me start by saying, I am not much of a gamer. So while the NVIDIA Shield Android TV box has been out for a while, offering 4K UHD support for native playback and over-the-top (OTT) services like Netflix, the value proposition really did not speak to me given its $200/£150 (16GB) $300/£220 (500GB “PRO”) price tag. The landscape for the device changed recently with major feature additions in the form of Plex media server and SiliconDust HDHR DVR recording engine support; turning this gaming-streamer into a legitimate home theater PC (HTPC) alternative.

The NVIDIA Shield Android TV device is just about the perfect size for home theater use.  However, given the game console billing I was expecting something a bit larger. For the DVR use case I opted for the 16GB model, as adding additional storage via one of its two USB 3.0 ports was always part of the equation. There is also a 500GB version available, but with the large price difference and the fact that is not really enough for TV recording, I did not see the appeal. USB keyboards/mice are also supported, making it much easier to get things setup and running – especially if you use a complex password. 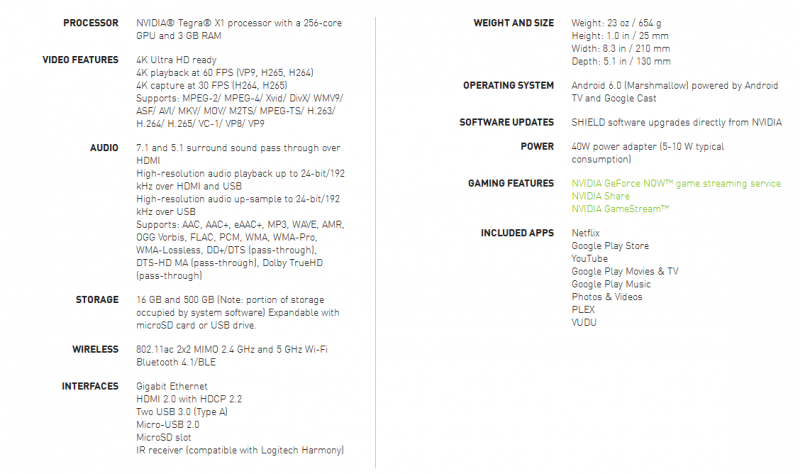 No issues were noticed with temperature or fan noise. 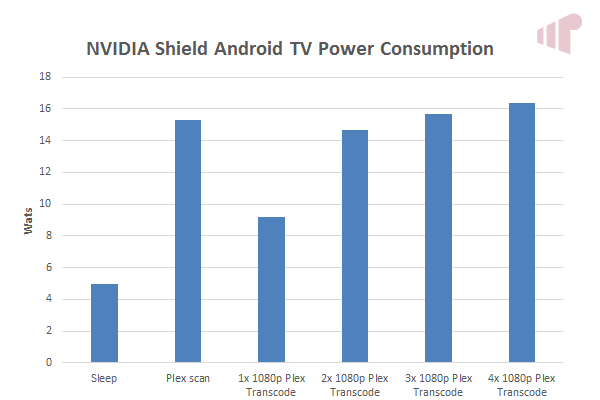 Power consumption was also quite reasonable while on, but standby is not a real low power state. It appears to just turn off the display. I would prefer it if it went under a watt when it was not in use. 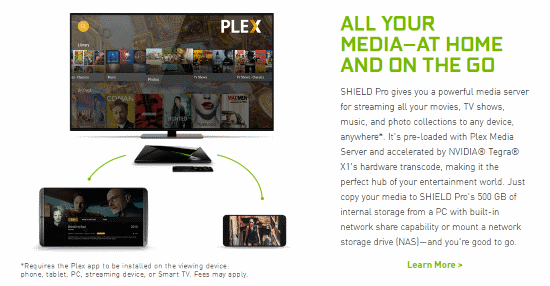 Plex media server was one of two major features that piqued my interest in the NVIDIA Shield, especially with the ability to do hardware transcoding. When it works, it is fantastic. I was able to reliably stream four 8Mpbs 1080p transcodes at a time without any issues – provided that the audio was not Dolby THD. Lowering the bit rate/frame size to 4Mbps/720p made no difference, so it is likely to be hard session limit. Magnificent, when it works. Unfortunately, the issues with Dolby THD are not limited to remote transcodes either – they also do not play on the Shield. With a significant number of Dolby THD titles, this is a blocking issue for me. Otherwise, playback on the device in Plex is generally quite good.

SiliconDust HDHR DVR was the other major feature of interest. The NVIDIA Shield has long been the best supported [non-PC] playback device for the HDHR DVR, but it only recently added recording. There is not much to say besides it just works. The only differentiation between this and a PC was that it is quite a bit more difficult to view the files on another system without using the HDHR View application (i.e. you cannot just map a share to it). I tested it with a full size 2TB USB 3.0 external drive, but it should work with a 2.5” as well. SiliconDust recommends a Western Digital My Passport, which would have a much cleaner footprint than what I used. Well done SiliconDust.

I was initially very disappointed with the state of file playback on the NIVIDA Shield. Plex refused to play some files, and the release version of Kodi did not bit stream and was also really quirky about refresh rate switching. Then I found the v17 “Krypton” beta (really alpha) version of Kodi in the Google Play store. Even though it is still quite rough around the edges, it sells local file playback for the device adding bit streaming and producing less flaky refresh rate switching. When this is stable, it will be awesome. 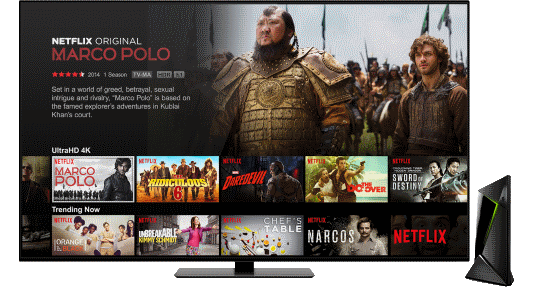 Access to OTT content is good, and generally works really well. With a wide array of sources available including Netflix, VUDU, HBO Go*, Disney Movies, etc. There is one glaring exception –  Amazon Instant Video is AWOL. There are a couple workarounds available though, but neither supports DD+.

I prefer the Sony app as it is much cleaner and consistent with the experience on Smart TVs. Naturally, Google Play Video and Google Play Music support works really well, but unfortunately (as was mentioned earlier) videos cannot be downloaded on the device – which is a huge disappointment.

* Comcast does not support HBO Go on Android TV. For shame, Comcast**, for shame.

** HBO probably deserves a shaming here too, since they built the platform which allows this sham to exist. 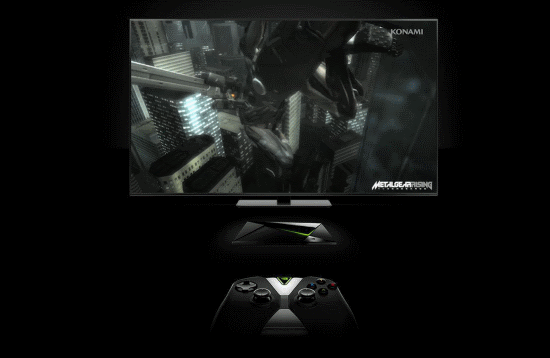 Again, I am not much of a gamer, so this bit is based solely on the observations of my two sons – who “tested” it for me. Most of their comments are framed in the context that we also have a Sony PlayStation 4 (PS4).

The NVIDIA Shield Android TV is hands down the most capable media streamer I have ever tested. The interface is fast and intuitive, with so many client features including OTT channels (notably missing proper support for Amazon Instant Video), gaming, and local file playback via Kodi v17 “Krypton”. At $200/£150, the 16GB model is very appealing even if used only for media consumption. Adding in the server capabilities, especially SiliconDust HDHR View DVR support (Plex’s poor support for Dolby THD is very disappointing), even more so. The $300/£220 500GB “PRO” model seems overpriced for what it adds; a microSD card or external HDD accomplishes the same goal for less. I would skip that one.

All that said, I do not think it does the NVIDIA Shield Android TV justice to just call it a media streamer. While it does not provide the same level of customization and flexibility as a real HTPC (plus and minus), for most it will meet the underlying requirements that forced HTPC use in the past  while providing a better general OTT experience. In fact, since the Shield arrived, I have wondered more than once if there was anything besides stubbornness keeping the HTPC still in my A/V stack. Only time will tell.