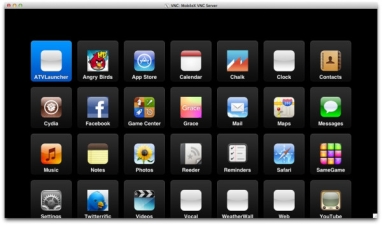 When FireCore recently updated their Seas0nPass tool to support untethered jailbreaking, we noted that there was some indication in the community that work to allow the Apple TV to run iPad and iPhone apps was progressing. Evidently that was understating the situation as there is now a full-fledged hack to allow iOS apps to run on the Apple TV. Steve Toughton-Smith and Nick “The Mudkip” have put together a system that allows the Apple TV to load an iPad emulator and a custom home screen. Adding support for the Apple TV remote takes some extra work on the part of the app developer and the hack’s creators are warning not to try uploading modified apps to the App Store, so we are not going to see widespread support coming soon, but hopefully Steve and Nick will get their wish and we are getting a peek at what official Apple support for Apple TV apps might look like.

The wily hacker hopes that his hack might nudge Apple towards building a bonafide app store for the TV box. “Remember how the unofficial iPhone apps back in ’07 forced Apple’s hand in creating an App Store?” he tweeted. On iPhone, jailbreakers got access to downloadable games and apps like Lights Off months before Apple opened its own iOS App Store. “I’d like Apple TV to get the same treatment.”