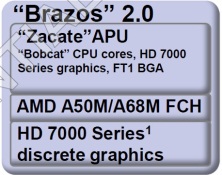 AMD’s Brazos family of low-powered APUs was intended to help AMD compete in the netbook and nettop market, and the higher-end Zacate chips have been a popular choice for folks looking into silent HTPC builds. Now word comes that Brazos is expected to receive a refresh in the first part of 2012. At this point the refresh, known as Brazos 2.0, will include rebranded APUs with boosted specs and a new mobile chipset. Given that Brazos 2.0 sounds like it might be a rather modest refresh, the most interesting part in the Brazos 2.0 lineup may be the Brazos-T aimed at tablets. With Windows 8 on the horizon, you can bet that AMD is hoping to get in on the market for x86 tablets.

Codenamed Brazos 2.0, the platform will feature updated Zacate APUs. (Ontario/C-Series refresh is not mentioned) The E-450 will be replaced by E2-1800. Fundamentally the same chip, E2-1800 features a slight boost to 1.7 GHz, while the GPU is rebranded as HD 7340 and is clocked higher at 523 MHz and 680 MHz with Turbo.