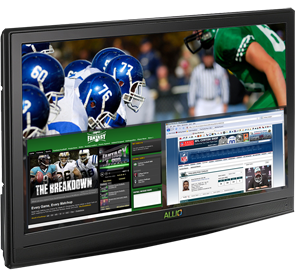 I honestly don’t recall hearing about their first generation products, but apparrantly they sold well enough to support a version 2.0. From what I can tell, it’s basically an LCD TV with a PC built inside of it. Pretty cool idea and I’d be curious to see some reviews of it, but I doubt I’m the only one that saw this coming with small form factor PC’s increasing in popularity.