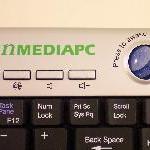 nMedia has been in business since 2004 creating cases and accessories for the HTPC enthusiast.  Their philosophy and vision is to "transform the total home theater experience by intelligently converging
digital entertainment AV functions, computer and networking technologies".  Obviously, their vision of convergence centers around the concept of a home media center.  This system is designed from the start to be fully controllable via a dedicated remote, but there are times that a keyboard and mouse are more appropriate.  In light of that, today we will take a closer look at nMedia's wireless keyboard/trackball solution.

The style of the keyboard is well in tune with today's HTPCs.  Black keys in a silver frame should go well with most home theater setups.  However, the translucent blue sides and trackball are reminiscent of the now tired iMac styling and could have been left off.  The USB receiver is quite utilitarian in design because 99% of the time it will be buried behind the PC amongst the clutter of wires and cables.

The setup was smooth as WinXP recognized the keyboard as a valid HID
device without requiring a driver.  The 8 page manual was more than
adequate to describe the install process along with the major features
of the keyboard.  The first step is to install the 2 provided AAA
batteries into the back of the keyboard.

Next, the USB receiver is plugged into the PC.  The receiver module
has a green LED that will illuminate.  Next, the user presses the
"Connect" button on the receiver and the LED goes out.  The last step
is to ensure the power switch on the keyboard is in the "On" position
and press the "Connect" button on the keyboard.  The 2 devices auto
negotiate a channel and ID and the receiver's LED will again come on to
indicate a connection has been made.  It literally took only 20 seconds
and I was controlling the PC from across the room.

The keys actuate just like a laptop keypad, but with a little more tactile feedback.  The lettering on the keys is silk screened rather than a decal.  In my experience, if a decal is applied correctly, it can outlast silk screening which tends to rub off over time.  In this case, the ink looks to be applied rather thick so perhaps won't be an issue.

The extra functionality hot keys on the other hand lack any kind of tactile feedback.  Most of these hot keys will only be used on rare occasion, but unfortunately the buttons used as the left and right mouse clicks are included in this group.  The left hand grouping of extra keys contains the mouse buttons along with the browser, email, Excel, and PowerPoint keys.  The right hand grouping contains the media player functions along with the Word launch button.  Note that the driver is required to utilize the Outlook, Excel, PowerPoint, and Word buttons.

The trackball has a smooth feel to it, but the actual mass of the ball
itself seems too light giving it a bit of a lower quality feel.  It is
manufactured from a piece of plastic that is about 1/2" in diameter.
Having used Logitech trackballs for the past 10 years, I've grown
accustomed to their smooth solid feel.  This keyboard could benefit
from a textured metal ball bearing or a heavier plastic ball to improve
its performance.

The ball is optically tracked, so in theory there is no need to clean the rollers.  However, because the ball is in contact with fingers which are probably not 100% sterile (think nacho cheese doodles), gunk will eventually build up internally.  This keyboard doesn't allow the user to remove the ball to clean the innards without removing all the screws in the bottom.  While not exactly handy, if the user is careful hopefully this would be a rare occasion.

Scroll wheel and middle mouse button functionality are completely missing from the design.  In my opinion, these 2 features are mandatory for web browsing efficiently.  It is true that there are several 3rd party helper utilities which can be used to emulate these two functions, but these are a hack at best and downright a pain to use.

As mentioned previously, the keyboard is essentially a full laptop key arrangement. There is a special function key to provide access to the keys which double as a numeric keypad in addition to the Office based secondary operations on F1 – F12.

The keyboard has legs which slightly increase the angle of incline.  However, this keyboard will most likely be used in a lap which won't benefit from the legs.  As a long time user of laptops, I found the keyboard comfortable to use.  Users who are more accustomed to desktop keyboards may need time to adjust to the short key press travel.

While operating the trackball, the user grips each edge of the keyboard.  The edges and undersides are not contoured for this position, so it became uncomfortable for activities like web browsing which require extensive trackball use.

The keyboard was tested in several scenarios.  First up was to determine the keyboard's functional range.  It performed well through walls and up one floor.  Of course, line of sight was not an issue.  You can be assured that this keyboard will not have range issues in most HTPC environments.

The unit was also tested to see how well it dealt with various forms of interference.  Because it operates in the crowded 2.4GHz band, superior noise rejection is a must.  Cordless phones, 802.11g wireless networks, and a wireless gampad were all used to see how the keyboard would respond.  None of them caused any noticeable performance issues or dropouts.  The final test was the bane of 2.4GHz devices everywhere; the microwave oven.  Unfortunately, at close range (less than 3 feet) the microwave won out.  This is not surprising as most devices that operate in this band give up when confronted with this kind of noise source.

Removing a single screw on the USB receiver gives us a quick peek inside.  The USB receiver is based on an 8-bit RISC micro-controller from Cyprus Semiconductor (CY7C63723) and a Nordic Semiconductor (nRF2401A) GFSK transceiver.  This transceiver operates in the 2.4GHz range with a maximum data rate of 1Mbps.  This chip can receive data from 2 sources simultaneously allowing the trackball and keyboard to have dedicated channels to help prevent data collisions.  The antenna can be clearly seen as a square trace on the front opposite the USB connector.  The "Pb Free" label on the front indicates that this is most likely a RoHS compliant device.

After removing 12 screws from the bottom of the keyboard, the back came off to reveal a couple PCBs and the keypad itself.  The trackball circuit is on its own PCB on standoffs and connected to the main PCB via a connector.  Cleaning the trackball would mean removing 2 more screws to release the trackball PCB.  Examining closer, nMedia used a ring of felt around the opening which rubs against the trackball.  This should help prevent the larger chunks from getting inside the unit.  The optical sense duties are performed by a device from Avago Technologies (ADNS-5030).  It is an LED based sensor capable of 1000 cpi of resolution.

In the middle of the main PCB is an 8-bit micro-controller from ELAN Microelectronics (EM78P451S).  On the right is the Nordic Semiconductor (nRF2402G) RF transmitter and on board 2.4GHz antenna.

After removing 3 screws which clamp the flexible circuit board from the keypad to the main PCB, the main PCB can be flipped over.  This reveals why the special function buttons have a mushy feel.  They are essentially a rubber mold with graphite pads under the buttons very similar in style to a calculator or car key fob.  While this may be fine for most of the special keys, going to either a metal dome or micro-switch for the left and right trackball buttons would be a vast improvement.

Designing a keyboard that can be all things to all people inexpensively is near impossible, but the nMedia MCESKB is a good compromise for most HTPC users.  Usually, most of the daily HTPC operations will be carried out through the use of a remote control.  Only the occasional debugging or web browsing session would require the use of a full keyboard.  In those instances, this unit would fit the bill nicely.  Due to the location of the left and right buttons, it is near impossible to play first person shooters without growing a 3rd hand.  Other games which are primarily mouse based should work fine.

Having a power switch on the keyboard itself ensure that the batteries are only used when you need them.  If you do forget to switch it off, the built in power saving modes seem well designed to sip power from the 2 AAA batteries.  The manual recommends rechargeable batteries if the user requires more than occasional use.

The left and right trackball buttons could stand to have more tactile feedback.  The keyboard could be molded to feel more comfortable while using the trackball and the ball itself seems a bit cheap.  The rigidity of the keyboard as a whole is solid and the main keypad looks sealed well enough to keep out most contaminants.

The range of the device easily lives up to its claim of 50 feet and has no problems transmitting through walls or other barriers.  With a 1Mbps data rate, the keyboard was quite responsive and showed no signs of lag.  Even though it is using the crowded 2.4GHz band, it played well with the cordless phone, 802.11g WiFi network, and wireless gamepad.

While there were a few ergonomic issues to contend with, the raw functionality of the keyboard was superb.  I would certainly recommend this to the budget conscious consumer who wants to go wireless without breaking the bank.