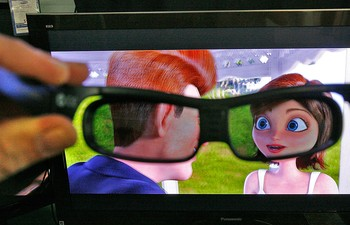 As far as HDTVs go, my set is getting to be a bit long in the tooth. There have been a number of advances in technology over the last several years that have tempted me to petition my significant other for an upgrade, but the arrival of 3D TV absolutely was not one of them. I know I am not alone in that assessment, but a recent USA Today story highlights just how not alone I am. Evidently, 3D TV penetration is only expected to hit 6 percent by the end of this year, and even that can largely be chalked up to 3D TV capabliilites rapidly becoming a standard feature in larger TVs. The few 3D channels available are relegated to the priciest subscription packages and do not draw enough viewers to even generate a Nielsen rating. Obviously, these are still early days for the technology in the home and there will be a time when 3D is a standard feature on every TV, but the article does do a nice job of breaking down the advantages that HDTV adoption had versus 3D TV adoption and the consumer resistance that 3D has met with.

Another awkward point: Some people just don’t like 3-D. In a phone survey last November of 1,300 Americans who had seen 3D TV, Leichtman Research Group found that 38 percent rated it poorly at 3 or below on a scale of 10. That’s twice as many as rated it excellently, at 8 or higher.

“It’s one of those examples where seeing isn’t believing, thus far,” said Bruce Leichtman, president of Leichtman Research. “That’s certainly not a great place to start.”