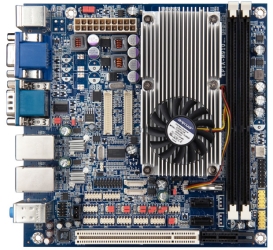 VIA has announced a pair of new mini-ITX boards, the EPIA-M900 and EPIA-M910, aimed at digital signage and consumer media applications. The new boards can be outfitted with the VIA Nano X2 processor, but are also the first to support VIA’s QuadCore processors. Both boards pair the processor with the VX900 chipset that we most recently saw VIA using on their Nano X2-powered VE-900 boards.

Remember the QuadCore CPU Via introduced last spring? We’ve been waiting for the chip to pop up in actual products, and now it has. Via’s new EPIA-M900 and EPIA-M910 Mini-ITX boards are available with the quad-core CPU.

The VIA QuadCore comes in three different speed points. At the high-end is the L4800E running at a base clock speed of 1.46GHz, while at the low-end VIA offers the U4650E with a base clock speed of 1.0GHz. Sitting right in the middle is the L4700E which our friends at VR-Zone got to spend some time with on one of the new EPIA-M900 boards. There does seem to be promise here, but like most of VIA’s recent offerings, I suspect the QuadCore processor and the new EPIA motherboards don’t offer quite enough performance for most living room HTPCs.

The EPIA-M900 can also be equipped with an S3 graphics card as per the one we were demoed and this allows for up to four 1080p displays to be connected. The system could even handle four 1080p video streams simultaneously, although this did slow down the system to a crawl, but at least the videos appeared to play just fine without any stuttering.