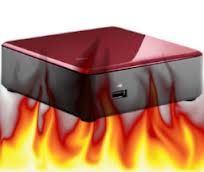 Intel’s Next Unit of Computing (NUC) shot to the top of many HTPC enthusiasts’ Santa lists when Intel finally revealed the final specs and prices earlier this month. The NUC will be available in two versions, the Thunderbolt-equipped DC3217BY and the DCDC3217IYE, which forgoes the Thunderbolt port in favor of a Gigabit Ethernet port. Our friends at TechReport recently got to take the DC3217BY for a spin and seemed to come away generally pleased with the experience. Certainly it looks like the NUC will have more than enough SFF horsepower to serve as a capable HTPC so long as internal storage capacity is not a major concern.

The Cliff’s Notes version is simple: Intel should have called this an Ultrabox, in an obvious play on the Ultrabook name. The guts of the NUC are essentially the same as an Ultrabook’s, right down to the 17W dual-core Ivy Bridge processor. This CPU, with the incredibly catchy name Core i3-3217U, has four threads via Hyper-Threading and runs at 1.8GHz, with 3MB of L3 cache. It’s not exactly a screamer by desktop standards, but it’s vastly more capable than your average Intel Atom or AMD Brazos CPU.

Unfortuantely, the NUC was not without its issues. In particular, the TechReport reviewer, Scott Wasson, noticed issues with the system buckling under the load of large file transfers across a network, with the transfer slowing to a stop and taking the rest of system down with it. In his review, Scott posited some theories about what was occurring, and after reaching out to Intel, posted a follow-up confirming that the issue was a result of thermal issues surrounding the placement of the wirless NIC and the SSD. Intel is reportedly working on a fix and is currently confident that the issue only affects the DC3217BY and not the DCDC3217IYE. With the NUC release imminent, it will be interesting to see how Intel fixes the issue.

In our recent review of Intel’s “Next Unit of Computing” barebones box, we explained a snafu we encountered with large network file transfers causing the system to lock up. At the time, we were working with Intel on resolving the problem and suspected it was confined to our particular review unit. After further testing, we have a clearer sense of the nature of the problem, and potential NUC buyers should read carefully from here.