It was nearly a full year ago that we reviewed the Fractal Design Node 304 small form factor cube case, and boy did we like it—it offered a wealth of options packed inside a tiny chassis. The size of it was one of the few gripes, where due to the overall size of the cube it made managing items within it difficult. With the introduction of the Fractal Node 804, they are presenting a significantly larger cube case to answer some the challenges of the small ITX case, as well as broaden the target market for the chassis. While the 304 came in black or white, the 804 only comes in black—which should satisfy the majority of users. At $109, the Fractal Node 804 is $20 more than its predecessor, but seems to bring a lot more to the table.

The most noticeable difference when we received the Fractal Design Node 804 was just the sheer girth of the chassis—it felt and is noticeably larger than the 304. See this simple chart to show the comparison in outer dimensions between the two:

It definitely feels larger as the evidence shows, but with this comes a much more spacious chassis. As you would expect, the additional space is used wisely to accommodate more of pretty much everything—more fans, more hard drives, more video cards, etc., as well as Micro ATX motherboards (in addition to the Mini ITX previously supported)

Let’s take a look at the full specifications before continuing:

Having reviewed a number of Fractal Design chassis, we have become accustomed (spoiled?) to the phenomenal condition in which the cases arrive—secure and unscathed (despite the best efforts) by your local delivery company. The unit comes with all the essentials you would expect from a chassis—as well as two rear 120mm fans, a single front fan, and screws for a complete installation. The interior of the lid has a fin design that appears to be aimed at pushing noise towards the back of the case, a subtle but nice touch. All of the open air spaces where fans can be placed include fan filters that are easily removable for cleaning, a huge help in ensuring the inside of the case stays clean and dust free as much as possible.

Immediately noticeable is the window on the left side of the chassis, which allows you to show off your equipment internals. In our situation, this is actually a con as any internal lights on your motherboard will end up showing through the window, but nothing a piece of cardboard couldn’t resolve if it was truly bothering you. The front panel is composed primarily of the same gorgeous brushed aluminum as in the previous Fractal Design case, with the bottom portion consisting of a mesh material to help aid airflow. This panel is easily pulled back to show the front fan filters—which are removable without being required to get the front faceplate off—as well as side buttons on the faceplate for audio and power controls. Also, the faceplate is capable of supporting a slimline optical disk drive. The drive is mounted vertically and hidden away from sight. Note that installing the optical drive does somewhat appear as it would inhibit airflow into the case.

Behind the front plate is support for two internal 120mm fans (one is included), and it’s by default on the left side of the chassis. Why does that matter? Well the Node 804 is cleverly designed in two chambers—the left chamber houses the motherboard, CPU, video card(s), CableCARD tuner or any other internal peripheral you need to connect. The right chamber–divided by a metal plate with well placed holes for cable management—is where support for the TEN (10) hard drives are located, as well as the power supply. By separating the chassis, it allows the heat generated by the power supply and hard drives to be completely removed from the heat generated on the opposite side with the processor and video cards. This is normally a balancing act where you need to manage your airflow to ensure circulation throughout all components; this is something done well with the Node 804 through their added space.

Speaking of the hard drives, they are supported vertically, in two bays which house up to four 3.5” hard drives. The bottom of the chassis allows installation of two additional 2.5” SSD (or HDD) drives. The upper bays do not support the SSD’s. The vertical integration of the drives in the upper bays as shown in the photo shows that you cannot remove the drives without removing the entire bays. This wouldn’t be frustrating except for where tight cable management is being used where then you need to re-organize the cables for all the drives, instead of just the one you removed. It appears the installation is managed this wayto ensure maximum airflow throughout all the drives, but we can’t help but wonder if there could have been support for them in a manner that made it easier to access without removing all. 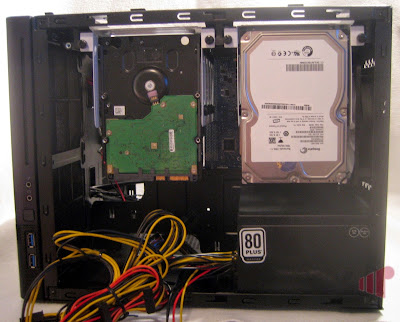 Moving to the opposite chamber we come across one of the easiest motherboard installations we have come across—mind you, most HTPC-focused cases are REALLY small! That being said, we had no problems installing our Mini ITX motherboard in the unit, and as you might expect there was more than enough space inside to manage the internals even after installation.

The fans inside the chassis are connected via a SATA power connector (a blessing if your motherboard only has limited fan support), and on the rear of the chassis there is a dip switch to toggle the fan mode into Low, Medium or High setting.

Once up and running, the unit was whisper quiet (fans set to Low) without any additional fans installed in the unit. From approximately five feet away the unit was barely audible, so it easily passed that barrier even though the Node does not include the sound dampened walls as the Define series does.

To analyze the different speeds, we ran the system to see how the different fan settings had an impact on the temperatures inside:

The high speed was unnecessary in our test environment and usage, but we found still a slight benefit in temperature with a pretty open case.

With a number of hard drives in it, the Fractal Node 304 was basically at maximum capacity while not having much room for expansion. For only $20 more, the Fractal Node 804 brings a lot more size and space to the table. Offering a wealth of space offerings, fans and slots for expansion, as well as a clever chamber heat management design, the Node 804 should easily suffice your needs today or in the future.

Thanks to Fractal Design for providing the Node 804 for review.