MythTV vs MCE, in pictures

This is slightly outdated, in that the screenshots for MCE look like they're from the original version, but I'm mentioning this if only for those unfamiliar with MythTV can see it is a very comparable (and FREE as in beer) operating system. And yes John…I'll try it again soon   Check out all the picture comparisons here.

END_OF_DOCUMENT_TOKEN_TO_BE_REPLACED

Now don't get too excited, unless you're the select people in the Houston or San Antonio area, but this is at least a good sign of things to come. AT&T competing with Verizon's FIOS & all the other cable providers will hopefully mean better choices for the consumer….instead of getting stuck with Comcast which doesn't give me NFL Network…but I'm […]

END_OF_DOCUMENT_TOKEN_TO_BE_REPLACED

These will probably be shown at CES, so I'm sure there'll be more pictures to come from this, but until then, at least it's a teaser of what you can expect down the road. Denon appears ready to announce that all of their A/V receivers for 2007 (scheduled to be released in the middle of the year) will support HDMI […]

END_OF_DOCUMENT_TOKEN_TO_BE_REPLACED

Actually a pretty cool box, as it can not only stream IPTV, but also OTA HDTV, and upscale everything to 1080i. And it can even do e-mail and browsing…reminiscent of the dead WebTV, so hopefully it does everything else better. And at £300, it sure better! UK firm Evesham has released the iplayer high-definition media center for £299 (584 USD), […]

END_OF_DOCUMENT_TOKEN_TO_BE_REPLACED 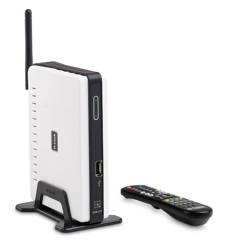 With a device like this, my concern is always on the limited number of decoders. Unlike an MCE Extender where you can at least use Transcode 360, what's to save you if a new codec comes out that this player doesn't support? And at $239, maybe a Wireless MVP from Hauppauge would be more appropriate…or even an XBox360 if MCE […]

END_OF_DOCUMENT_TOKEN_TO_BE_REPLACED

Venice is a collaboration between Skype and Kazaa to distribute IPTV over a P2P network. It seems to be gaining a lot of traction with industry buzz. It's currently only open to a group of private beta testers at the moment. You can be sure a lot of people will be watching closely to see how the next generation of […]

END_OF_DOCUMENT_TOKEN_TO_BE_REPLACED

Yay! A remote article, my favorite type 😉 RemoteShoppe, the purveyor of fine remote reviews, has a holiday gift guide up for ya'all. Not surprisingly, Harmony was the gift of choice in more then one category. From the article: BEST TOUCHSCREEN REMOTE Universal Electronics' Nevo SL This was the most difficult recommendation because the NevoSl and the URC MX3000 are […]