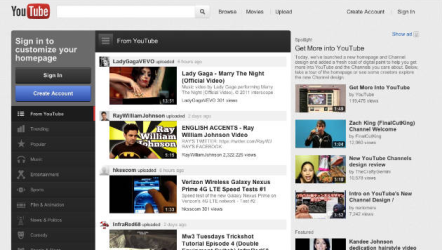 If you have been to YouTube this weekend, then it likely looked a bit different than usual. Google is in the process of rolling out a major new look for YouTube intended to highlight YouTube’s content channels and personalization options. Simply visiting YouTube will reveal the new focus on channels, but login to your Google account and you will gain the option to share through Facebook and Google+ and get a list of personal subscriptions and channels as well as personalized recommendations of channels worth checking out.

The channel-centric web redesign is just the beginning. Similar changes are in store for other YouTube apps and access points. The first place we are likely to see this occur is in the upcoming Xbox 360 update, but keep an eye out for updated iOS and Android apps to adopt a similar focus on channels. We’ve commented before on how YouTube viewing time competes with cable channel viewing time, but it looks like Youtube is intent on further blurring the lines between YouTube channels and TV channels.

What do you think of YouTube’s redesign and content channel aspirations?

This focus on channels is part of YouTube’s attempt to evolve from a site that is on average frequented for 15 minutes a day to a destination that invites users to watch for hours. It also ties in with its recently announced professional content initiative that will bring around 100 new channels from celebrities like Madonna and Tony Hawk as well as prominent YouTube stars like The Young Turk’s Cenk Uygur to the site in the coming months.