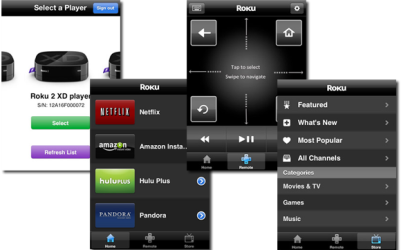 Roku released Update 4.2 for the Roku family of streamers just a couple of days which, among other things, reportedly prepped the systems for incoming iOS and Android remote control apps. Well, the iOS app is now available for free from the App Store. The app allows for full control of the streamer with swipe and touch gestures and allows for adding, removing, and even launching channels directly. The best part is that it evidently is not limited just to the newest Roku boxes. The app reportedly works on all Roku devices and can even support multiple devices on the same network, though no word if it will work with third-party branded Roku devices such as the ones that Netgear was selling for a while. Hopefully future extensions of the app will allow for direct control of the channels as it would provide an excellent way of accessing music related channels without turning on the television.

Directly on the heels of an update for its newest media streamers, Roku has released its official iPhone remote app. Apparently “inspired by user feedback”, it allows users to launch or rate channels, control the box with touches and swipes, and add or remove channels from their box directly from the app itself.