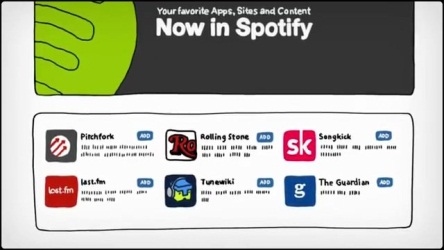 Spotify has always had a strong social media bent that has only become more pervasive as Spotify has intensified its relationship with Facebook, however most of the attention has been on sharing your music listening activities with the wider world. Spotify is looking inward with their latest Spotify client. Rather than just sharing your activities out to Facebook, the Spotify client now sports a ticker of what your friends are listening to and trending albums and tracks.

The bigger news is Spotify’s announcement that they are turning the Spotify client into an apps platform. The first 11 apps are still in beta form at this point and they focus on editorial content from sources such as Rolling Stone and Billboard or playlist generation such as the app from Moodagent. There is also a Last.fm app that hints at how third party music services might incorporate their music discovery services into Spotify though I suspect there where will be few music streaming services that have enough side business in music discovery to risk cannibalizing their own streaming services.

It’s a beta release, and we’re only seeing 11 partners at launch today. Installing apps reminds us of adding browser extensions. Just tap the add button, and the HTML5 app will appear in the left rail under the Apps listing. It’s a simple process, the apps are free, and many of the apps don’t require you to login to a separate service or authorize.