Dijit Universal Remote Control for iPad Getting an Overhaul 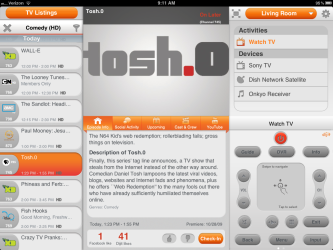 We had the opportunity to spend time with the Dijit Universal Remote Control app when we reviewed the Griffin Beacon Universal Remote Control. Dijit does work with all iOS devices right now, including the iPad, but it doesn’t really take advantage of the tablet. Dijit is updating their app with enhanced support for the iPad. The updated app will take full advantage of the iPad’s screen real estate. The new layout will have bigger controls, have more space for listings and activities, and allow for an on-screen remote control at all times. The new app is still a few weeks away, but the early previews are looking promising.

The iPad version also sports visual cues in what otherwise would have been empty space to guide users through using the app. Otherwise, the iPad version is a cleverly re-imagined version of the original iPhone app — the ease of setup remains, as does the app’s focus on building a social watching experience by linking up to Twitter and Facebook.