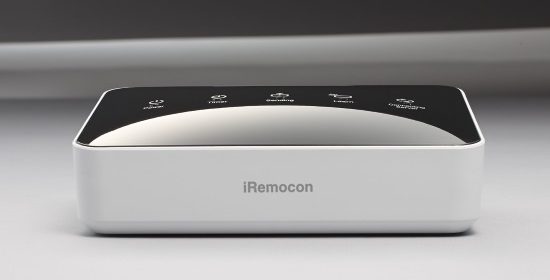 There is a point in scaling out a home theater where a good universal remote control becomes an essential part of the experience. Yes, you can get by with the pseudo universal that came with the AVR, but then you have to train your family, and worse the babysitter, how to use that in a productive way. They need to have input specific knowledge to understand how to make it all play. We’ve seen myriad solutions that attempt to resolve this, but so far unless you step up to the quite expensive custom integrator (CI) solutions, nothing I’ve played with can touch the [still sometimes frustrating] experience of Logitech’s Harmony remotes. iRemocon has taken on this challenge with their $180 smartphone driven IR blasting fixed location device. Offering infinite customization via their UI designer, it holds significant promise – let’s see if it can deliver.

The iRemocon arrived in a plain white box, including an Ethernet cable and power supply. A simple physical remote is not available, so the iRemocon can only be controlled via their app running on a smart phone or tablet. While this approach removes the line-of-sight (LoS) requirement for controlling devices, for $180 it should include more flexibly here [Editor’s Note: we had some discussion around whether the lack of a physical remote is a legitimate gripe because it was something that buyers will know going in and should not come as a surprise. While I can agree that there is a place in the market for mobile app only remotes, the point here is that for the price ($180), it needs to offer more given the competitive landscape.]. Unfortunately this was not the only hardware miss, because the device does not include support for Wi-Fi. Naturally this means that you must have hard wire Ethernet available where your components are located. You must also centralize all of your components in a single location (i.e. can’t have a closet and the TV on opposite ends of the room) because while remote IR blasting is supported via an optional accessory, they must be physically attached to the rear. Power consumption was miserly, only drawing 1.5W, which is great, but given that it is IR only, lacks IP or Bluetooth control, and most of the intelligence lives in the mobile app that is easy to understand.

Initial setup was very easy; the app located the iRemocon device and stepped through the wizard quickly to enable IR control. Oddly, only two components (TV + one) are supported out of the box, so other devices must be added by learning IR codes specific to that device. This is fundamentally wrong; teaching IR codes to a smart remote should be the last resort, not an essential part of the user experience. A modern universal remote must draw on a broad database of control codes, for pretty much every mainstream device out there. Not only does this significantly lighten the setup experience, but is critical to enable support for devices like the Roku, which respond to IR, but do not ship with an IR remote.

The iRemocon’s intelligence primarily lives in the mobile app and is device specific. On one hand this is nice because it is possible to have discrete voice controls per phone or table, but on the other hand configuration needs to be handled per mobile as well – and you lose all voice and geofencing settings when changing the remote’s skin adding configuration hassle. The iRemocon supports geofencing and timers, both are great features to include especially if using the iRemocon with IR enabled shades or something similar and both worked reliably, but the voice control was very spotty. It worked on one device (when the application was running of course), but not another. Implementing this feature in the application was a mistake as well, because the real value of voice control is if it is always on and listening without the need to interact with a mobile. If I need to pull out the phone, authenticate, and launch the app why would I then stop to ask it to turn on the TV – the TV power button is right there, it’s getting pressed. So while this was a slick feature when it worked, the value is greatly diminished by the approach. Using the application is also frustrating because its navigation stack behaves inconsistently, and doesn’t block back (e.g. “press twice to exit”). So it is all too common to intend to navigate backwards in the app, and end up exiting. That said, the app does work reasonably well acting as a simple IR blaster, and with the promise of complete UI customization there is enormous potential to enhance the experience.

As many of you know, besides writing for Missing Remote, I am also a software developer. I point this out to highlight that working with UI designer tools is a large part of what I do and something that I have extensive experience. It’s not uncommon for them to be difficult, unintuitive, buggy, or frustrating, but I’ve been doing this for a long time (~17 years) and have learned to use countless tools to create UIs both inside the constraints of an ecosystem, for mobile, and the web. With that context in mind, I cannot remember ever learning anything as soul crushing as the iRemocon UI Designer. I lost count of the number of times the Adobe Flash based interface just didn’t work–locking up, failing to load resources, popping up random error messages, crashing, or randomly reloading which caused the loss of work. Despite all of this I did finally manage to create a custom layout hosting one other device tab, with buttons, macros, and custom images, but when I couldn’t figure out how to push that to the phone I gave up. Frankly, I just had enough. It was entirely too much effort to reasonably expect from anyone who wasn’t getting paid to deal with the pain. Of all of the deficiencies with iRemocon, this was the most disappointing because it was supposed to be the “get”– the unique thing that made iRemocon different, special, and worth paying a premium for, and it was simply awful.

Putting a fixed controller hub in the A/V stack is a fantastic approach to solving the building-a-better-universal-remote dilemma, one that I completely understand, embrace, and an area where I would love to see more companies creating fresh and unique devices, but iRemocon misses the mark in many key areas. It is Ethernet only, forcing users to run hard wired networking to the A/V stack. There is no physical remote, which means that a key tactile element to using the home theater is lost, and a mobile device must be dedicated to running the app all the time to make it work properly. Most importantly to extract anything more than simple control from the iRemocon you have to learn how to develop custom interfaces in its Adobe Flash based UI Designer – an incredibly frustrating experience. Generally, I believe that there are no bad products, only bad prices. So while there is an amount of money where the iRemocon’s mix of kludgy user experience, constrained hardware choices, limited device database, unintuitive mobile application, horrible UI Designer and philosophy of pushing the effort to tie it all together onto the customer is right – $180 isn’t it.

Thanks to iRemocon for providing the review sample.