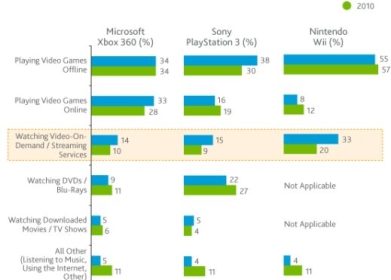 The most recent Xbox 360 dashboard update has received a lot of attention here at Missing Remote and around the Internet because of the update’s focus on enhancing access to streaming media. Thus it should come as no surprise that Nielsen is reporting that game consoles are increasingly being used for media streaming purposes. Nielsen recently released a report detailing usage patterns for the three major consoles for 2010 and 2011 and the percentage of time spent streaming media increased across the board, particularly for the Wii. Also of interest was that the Xbox 360 and Playstation 3 both saw drops in the amount of time spent watching media on DVD and Blu-Ray, suggesting changes in usage patterns that go far beyond the world of game consoles. It will be interesting to see what next year’s numbers look like given Microsoft’s increasing interest in pushing the Xbox 360 as a media streamer.

Nielsen, the purveyor of all things statistical and demographic, published a new study this week on game console usage within the US. According to the report, released on Wednesday, gamers this year spent notably more time streaming video to their consoles than they did in 2010, due in large part to the growing availability of services like Netflix, Hulu, MLB Network and ESPN3.