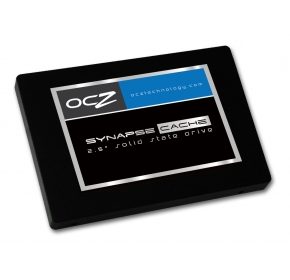 Like the OCZ combined product, the SSD hard drive cache is probably not very interesting for the average HTPC deployment since a video stream probably isn’t hot (i.e. the same data is not being read over and over again); but, if you could use the same device to cache a Network drive, and assuming the caching algorithm uses some intelligent read-ahead  (e.g. If I just read block 1-10,000, pre-caching blocks 10,001-n might be a good idea) then we’d have something pretty interesting.

Presumably, a recorded show would stay in the SSD cache until room was needed, meaning the commecial processing could complete without having to completely re-read it off the network drive.

Hard disk drives are getting a caching flash wrapper if OCZ has its way. Watch out for this SSD supplier’s Synapse caching flasher.

Not content with the RevoDrive Hybrid, a PCIe card containing a flash memory store and DataPlex software to manage the on-card hard drive, OCZ has revved its cocktail of components and crafted a new drink for keen flashers, the Synapse Cache Solid State Drive (SSD).