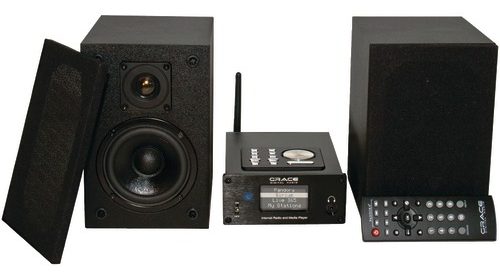 With Pandora recently going public never has there been more of an attention and focus surrounding streaming radio services. Grace Digital is a company which focuses specifically on media in the home have targeted the GDI-IRMS300 Internet Micro Hi-Fi Stereo System for the home audio enthusiast who is looking to integrate streaming Internet audio into their home without the need for wires or a full blown computer. With an MSRP of $249.99 this unit offers a full compact stereo system with a receiver, amplifier and a set of bookshelf speakers.

When it comes to audio solutions integrating online radio the usability is almost as important as the hardware itself. For a solution like the GDI-IRMS300 however it is being priced almost as a stereo replacement (hence the name) instead of an addition. There are numerous Grace Digital Internet radios which provide a lower cost solution if you are wanting to complement your current setup.

That being said however, specs are always still worth looking at and here is what the GDI-IRMS300 Internet Micro Hi-Fi Stereo System provides.

The Grace Digital GDI-IRMS300 Internet Micro Hi-Fi Stereo System comes very well packaged in a glossy retail box fit for a brick and mortar store shelf, with descriptions and pictures on the back. Inside the box everything is perfectly fit and covered in protective plastic and styrofoam.

Opening up the box we find everything you will need to get up and running: user guide, remote control, batteries, speakers, speaker wire, auxiliary RCA-mini cable, wireless antenna and the receiver/amplifier unit. The User’s Guide is much thicker than normal and is a nice change from the growing trend of manufacturers to simply offer their guides for download or on a CD, and finding necessary information is easy. I mention the guide because during the testing I had to go back to the Guide several times to help guide me, so make sure to read it before beginning.

The heart of the unit is the receiver with its built in amplifier. Although only powering a meager sixteen watts of total power it should be sufficient for whatever small room we plan to install this in. On the front is an old school power flip switch which I actually liked, along with the LCD display and headphone jack. Control buttons are all on the top and include all functionality from the remote control and more. There are two types of power to the unit, one being the flip switch itself and then to power on the radio offerings there is another power button on the top of the unit–remember the GDI-IRMS300 also has a built-in alarm clock. On the rear of the unit is the antenna, power, left and right speakers, line out, auxiliary line in connections and a USB port. Note there is no Ethernet jack on the back as the unit is really designed to be used wirelessly, however you can use a USB-to-Ethernet adapter if wireless access is not available. Setting everything up was quite easy–simply connect the two speakers, power on the unit and attach the antenna.

One thing to note about the Grace Digital unit is that the overall size of the unit is fairly large, and the combined weight comes in at 9.5lbs. They offer a number of more compact wireless audio players so you should know that going into this purchase. The benefit of the GDI-IRMS300 is the separation of receiver and speakers which allow a lot more flexibility in regards to your home audio setup. With this you can connect the head unit to your audio/video receiver (AVR) and run the speakers to another zone in your home. Or you can replace the speakers and/or cables altogether, and even hide the head unit and only have the speakers visible. There is only one input so unless you have fairly low expectations and no need for actual surround sound using the device as the main audio video receiver (AVR) is not ideal.

When first powered on I was prompted to connect to my wireless router which the GDI-IRMS300 was able to find and detect, and I got full bars as would be expected within my apartment. Entering the wireless key however proved to be a laborious process (WPS support would be a nice feature for future versions) however, as you are limited to using the left/right controls to navigate through the alphabet and characters menu. Fortunately this is only necessary once as the unit remembers the network even after a firmware upgrade, which I was prompted to do so upon first connection to the Internet.

If you simply power the unit on and connect to the Internet you can instantly start streaming from thousands (over 50,000) of radio stations which Grace Digital connects through the system. You can scroll through by genre or location, similar to what you are familiar to if you have ever used Windows Media Player or similar radio streaming programs. On the unit it displays the station name, song and bit rate quality.

The Internet radio offerings are great, however the real beauty of what Grace Digital offers is the numerous higher quality offerings of the likes of Dar.fm, MP3tunes, Live365, Rhapsody, CBS Radio and most importantly, Pandora. No word yet on Spotify or Google’s music services but given the product has Internet enabled firmware upgrading I wouldn’t be surprised to see those added at some point. In addition to those it has a built in uPNP player so it can stream any supported audio content from those types of servers as well, and there’s also podcast support via RSS subscriptions.

All of the additional streaming radio services need to be enabled online through a Grace Digital portal (http://www.grace.reciva.com) where you are asked for your login information for each given site, or to register. The website is extremely easy to navigate and all of the steps are clear and concise, with the exception of adding stations to Pandora which was beyond my level of patience. Fortunately that stage was really not necessary for my needs since the GDI-IRMS300 can automatically detect your Pandora stations (yes, even Quick Mix) enabling navigation through them as easily as on the computer. The speed of the interface seemed very responsive and the quality was consistent with what should be expected. Note that for Pandora there is no bit rate shown on the unit, just like on their website. I tested the speaker fidelity with the audio volume maxed out and while there was some distortion with the speakers themselves with low bass sounds the sound from the files themselves seemed to be very good.

To truly test the quality of the Grace Digital unit I utilized the XtremeMac InCharge Home BT we previously reviewed connected to a dedicated Onkyo AVR and played music directly from my iPhone to the GDI-IRMS300 receiver. Quality of the audio was on par with the abilities of the speakers. Note that you are able to connect different external speakers to the unit but you are limited to sixteen watts of power from the receiver, so you could connect some high quality, responsive speakers but would not be able to drive a full size floor speaker. I’m not an audiophile but in reasonable sound levels the quality was crystal clear and sounded great throughout my house. The bass was lacking a bit as you might expect from five watt bookshelf speakers but the treble did not sound tinny like some lower end audio speakers. There is an equalization setting to adjust the treble and bass but anything over +2 for bass proved pointless as distortion from the woofer occurred.

Power consumption was measured using a P3 Kill-A-Watt Electricity Load Meter and Monitor and the Grace Digital GDI-IRMS300 proved more than acceptable numbers. Please refer to the chart below:

Startup time on a full power up took approximately 54 seconds from power on to streaming radio. When using the soft power button, toggling from alarm clock to radio, it was less than two seconds.

If the review were to stop here it would already be a positive one given all of the features and offerings Grace Digital has put in its GDI-IRMS300. Fortunately for the consumers there is more to write about in regards to the Grace Digital Remote application offered for free on iPhone and Android devices. Since I have an iPhone 3G with iOS 4.2 installed, I will take a closer look at the Grace Digital Remote application available in the iTunes AppStore. The installation is quick and the only requirement is that your iPhone be connected to the same wireless network as the Grace Digital unit. It supports multiple devices so no issues if you have multiple throughout your house. The application can even configure your alarm clock time and day settings if you so desire. You can control virtually every aspect of the device, from powering on and off to even voting thumbs up and down on audio tracks. It’s even more powerful given that it shows the album artwork for songs playing and you can toggle volume as well as skip tracks, create and edit playlists and more. There was virtually nothing I could think of doing on the GDI-IRMS300 unit that it was not capable of doing. That being said, all was not perfect as the application hung for a bit, where the radio proceeded to play tracks but the app did not update. After some testing I found that if I kept the app on the Now Playing screen it was fairly reliable, but if I browsed around the various menus at the bottom that’s when things got sticky. A full reboot of the system resolved the issue but something worth noting. One thing oddly missing from the interface is a Play/Pause button, but given the fast startup you can use the power button instead–but still odd.

At a price of $249 (but can be found on Amazon for around $191, or even as low as $179.99 for buying a refurbished unit from GraceDigitalAudio.com) the Grace Digital GDI-IRMS300 Internet Micro Hi-Fi Stereo System does everything it advertises, and does them quite well. In a tiny box with included bookshelf speakers you can control all the audio not only on your local network but also across the Internet, with over 50,000 Internet radio stations but most importantly fantastic services from Pandora, Live365, Dar.fm and more. The design allows for the flexibility to place the head unit away from the speakers, and the line in and out give you the options to configure in multiple zones or to connect to your existing AVR if so desired. The quality was quite acceptable and the inclusion of the free yet powerful iPhone/Android remote controls really put the feature set over the edge. While there is not yet integration with Spotify or Google Music services as of this review, given that the device has Internet upgradeable firmware it could be possible down the road.

Thanks to Grace Digital for providing the review unit.