Rewind two years ago to 2009–Hulu was really starting to gain momentum and attention, as well as some other fledgling TV streaming services, but all required a keyboard and mouse for use with your Windows Media Center HTPC. Then, SecondRun.tv was released and not only made it possible to control and watch Hulu.com content, but did so in a very attractive and easy to follow user interface (UI), utilizing fan art and covers along with descriptions to make things easy. Of course, Hulu soon blocked the service and eventually released their own 10′ UI based application called Hulu Desktop, and then SecondRun.tv remained fairly silent with a few mild updates…until now. With version 2.5, SecondRun.tv has received a pretty significant overhaul and now is aiming its sights not just at you TV cord cutters, but also at movie watchers alike. That’s a lot for one app to tackle.

Almost everything you can do with SecondRun.tv is fully customizable. There are two main components to the application–the TV service and the menu service. With TV, you are given two methods of sorting and viewing available shows–in a traditional Media Center Guide listings style or in a cover art flow view. Both are available as direct entries on your Media Center Start Menu. Given that all of the shows are available 24/7, I found the guide listing to be a bit odd but I’d imagine there are some traditional TV viewers who would be comforted by this view–after all, this is how Microsoft tries to display their “Internet TV Listings.” So how do you configure all of these shows? For this, you will need to pull out your keyboard and mouse, as a 2′ interface is required for configuration. You select the channel and then in most occasions you would select a show as well–so in CBS I can select to show all of the available shows, or just S*@$ My Dad Says. 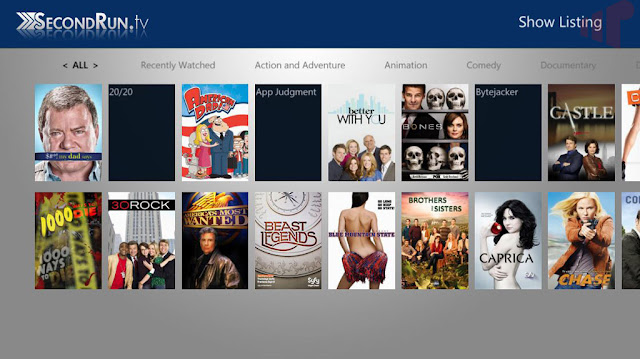 The task of adding shows is very simple and I was impressed by the amount of listings available. SecondRun.tv parses its available TV shows not only from Hulu and other streaming websites, but also via Netflix if you have a subscription. The Netflix show experience is far superior to that from other streaming sites, as you would expect in a paid service. I enjoyed how all of the selected TV shows are meshed into a single experience; I mentioned before to Microsoft how jarring their Internet experience is in Media Center because they expect users to know what channel their show is–a very counter intuitive expectation in this day and age. Unlike SecondRun.tv, in Media Center’s Internet TV you go to a particular channel such as CBS or Fox or even Netflix, and then you select the show you wish to watch (unless it’s a featured show on the front page). With SecondRun.tv however, whether I want to watch Top Gear or Big Bang Theory, they are shown on the same interface. The interface for each show contains descriptions of each episode and a fan art backdrop to cover the page. The data and cover arts are scanned each time it processes the guide, which runs at a configurable interfval based on your preferences. 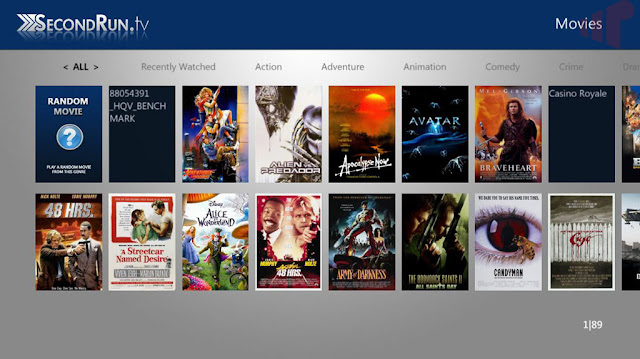 As mentioned before, SecondRun.tv 2.5 brings to the table the ability to show and play movies as well, and not just ones stored locally. It has the rather unique ability of bringing in Netflix-available movies as well! In a creative addition, if you have some Netflix movies you have in your collection, you can add their feed number into your database and that movie will appear as part of your collection. This is a fairly manual process but I was pleased to see it. Keep in mind, if the movie disappears from Netflix’ streaming experience, so too does it disappear from your collection.

Adding local movies is a much simpler process. By now, you probably already have your movies sorted and organized for your particular favorite movie manager software, and SecondRun.tv is a similar experience. You select the folderyou wish to manage and SecondRun.tv automatically adds them to your collection and attempts to parse and add the metadata information (title, description, artwork, etc) automatically to the list. Anything that is not recognized is shown as such, and you can, of course, manually add information or search for different film info. Unlike a program such as My Movies 4 which stores the metadata information in a file within each movie folder, the information for SecondRun.tv is stored in a local cache file that is continuously refreshed, similar to the TV process, at your desired interval. Both methods work very well and I found performance of loading approximately 100 movies to be a similar experience. 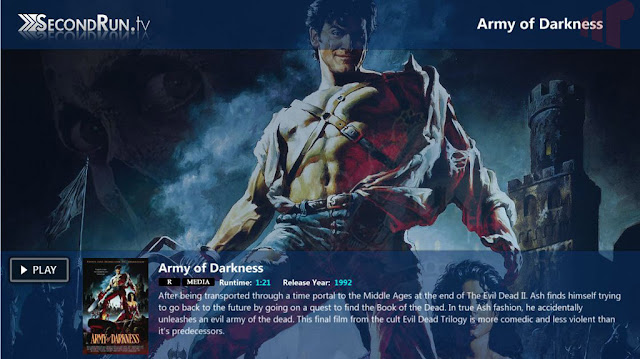 One last part I will mention about the movie portion of SecondRun.tv is the “Random Pick” tile which will randomly select and play a movie from your library. I find this more creative than useful, since I often know what movie I want to watch when I go to my Library. But still, kudos for originality here.

While SecondRun.tv is almost fully customizable as far as the data is concerned, the one bit I would have liked to control is the menus on the Start screen; for my taste, I will never be using the “TV Guide” view, so i would have liked to remove that, especially given that it’s the first option on the row. Another piece, and I’m not sure this is so much a failure of the product if not a dream request on my part, but given that Microsoft has Internet TV channels already in their regular guide couldn’t a hack of some sorts be made to integrate the SecondRun.tv “channels” with the regular guide? Then people who have not completely cut the cord would not need to jump around.

While I mentioned my pleasure with Netflix-based programs experience, the same cannot be said about Hulu and others, such as ESPN3.com. For ESPN3, you are simply thrown into the ESPN3 UI, with no clue about what show is on or even what you will watch until it loads. With Hulu, you have to sit through some ads, and sometimes I even had to click on a dialog box confirming whether I wanted an ad or complete a survey. And, of course, both required a keyboard and mouse. This is no fault of SecondRun.tv itself, but merely a limitation you need to be aware of if you plan on relying on this for all your content. 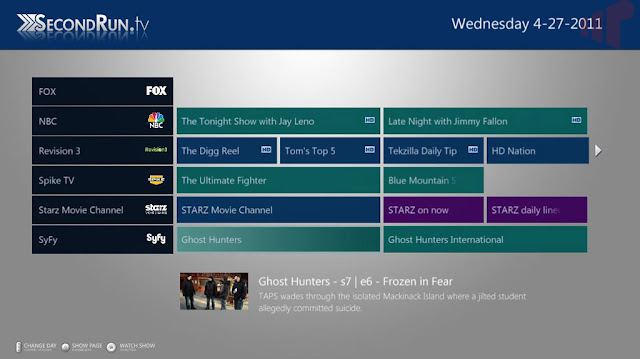 Onto the interface, you are either going to love it or hate it. In the past few years, the idea of embedding fan art into your media descriptions has grown in popularity, for better or worse. Unlike an application like My Movies where you can choose several interfaces to choose from, SecondRun.tv only provides one option–which takes up about 75% of the screen, and then the lower bar section is for thumbnail or cover art and description. This is not a big deal for Movies where you usually will just play it, but for TV shows with numerous episodes I found it cumbersome to have to keep sliding to the right to get to the desired episode.

Another area lacking in the movie interface is knowing what file type a movie is–all of my movies, either Blu-ray, DVD or other are shown just as “media.” While not a huge point, I do miss being able to see the distinction in filetype and quality; some might appreciate the simplicty, but I’m a geek when it comes to this. Also there’s very minimal information–no cast, no ratings, no reviews, no similar movies. It’s pretty much the cover, fan art, and description. 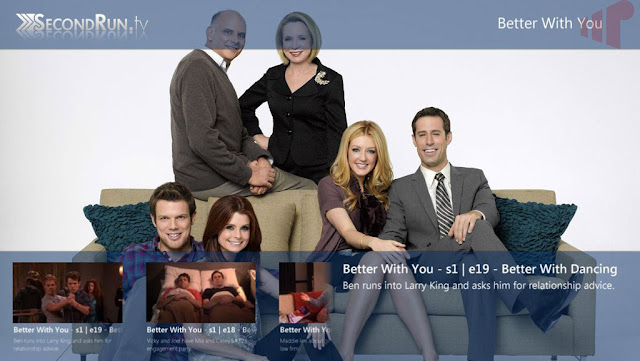 Where do we stand after looking at the whole? That’s the toughest part with doing a review of a product like this. On the one hand, the TV show integration is awesomely simple and easy to follow, and provides a unique service that meshes everything together. While I still prefer Media Center’s Netflix interface, the ability to have ALL my Netflix content aggregated in with all the other online offerings is a welcome convenience. I’m still waiting for an application which meshes my locally stored RecordedTV along with similarly available episodes online, but that’s no fault of SecondRun.tv 2.5.

You will notice I called out that TV use is “Approved for Everyday Use” and my reason for specifically calling this out is because the Movies experience is lackluster. If this was 2009 again, and the original SecondRun.tv supported this type of movie experience it would have been great. But, it’s 2011 now; competition for Movie applications (as shown by our poll last month) is staggering and there are some amazing options for viewing your movies. I appreciate the innovation in supporting Netflix movies tied in with locally stored movies and I thought the “Random Choice” was clever, but not significant enough to warrant a must use.

For a V1 movie integration, I do commend the SecondRun.tv team. Make no mistake about it, the reason the application was able to convert to a pay model with a fee of $3.99 has to do with the TV functionality which I have absolutely no problem with. The original SecondRun.tv was donation-only–clearly and unfortunately, there were not enough donations and so, for 2.5 if you want to play, you have to pay. $3.99 is a bargain to have access to the plethora of streaming TV shows at your remote’s fingertip. I’m sure the Movies feature will continue to expand–and maybe include even more online sources–but for now, even if the only thing you used of this app was the television shows, you would be getting an absolute bargain!