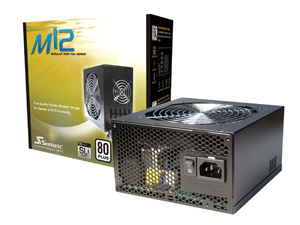 The M12 is the first power supply from Seasonic that supports modular cables. It is offered in 500W, 600W and 700W versions. The main cooling fan is a quiet 120mm fan. There is also an additional 60mm fan which is activated in extreme heat situations to provide additional cooling. On the next page we will take a detailed look at what comes inside the box and then later we'll see how the M12 performs in real world situation.

When I first picked up the box, it was surprisingly heavy. The box itself was very durable and sturdy. Upon opening the box, I found everything neatly placed and well packed. The power supply was well padded and wrapped in bubble wrap.


Well, that covers the basics of what's included. Let's take a little bit closer look at the power supply itself and it's different aspects. Sadly, I don't have any pictures of the internals. I didn't crack the case open prior to installation.

That's the Seasonic M12 from almost every angle. I'm going to quickly run through the specifications and then we'll take a look at the installation of the Seasonic M12 and how it performs in a real world environment.

Let's take a quick look at the features and specifications. If you've been looking at the M12 you've probably seen all this before.

2. Total Protection – Over Voltage / Over Power / Short Circuit Protection – Total protection for your power supply, your system and yourself.

You would think installing a new power supply would be a piece of cake. Unfortunately the Seasonic M12 is about 10 mm deeper than most power supplies due to the addition of the 60mm emergency fan. In most PC cases the added depth would not be an issue. I ran into trouble since my HTPC case, the Accent HT-400, has a tray that the power supply sits in which was too small. This issue would probably also be found in a Zalman HD135 case as it shares a similar design.

Here's what I did to remedy the situation: Using a Dremel to Mod Your Case

Once the issue with the tray had been addressed, I got down to installing the power supply. Here's a look at the M12 installed in my case.

At this point the question on your mind may be, how does the M12 run in a real world environment? Instead of looking at voltage readings and efficiency graphs, I am going to share my experiences and impressions from using the Seasonic M12 in my daily use Home Theater PC. For the last month, the Seasonic M12 has been running my HTPC non-stop. During that time the machine was allowed a couple of nights at the beggining of February to be turned off and cool down so that the Artic Silver would set properly. Since then the HTPC has been running 24/7. For posterity, I've included my system specifications below.

While not the most powerful PC, it was beginning to require more power than my prior Seasonic Super Silencer 350W had to offer. A 430W PSU may have been sufficient, but I decided that long term a 500W would be a safer bet should I make significant upgrades. The Seasonic 80-plus power supplies are highly efficient across the range of wattages they provide so I was not concerned about my PC not pulling enough power to operate the PSU at an efficient level.

Performance-wise the Seasonic M12 blew me away. It was significantly quieter than my prior Seasonic, which used only an 80mm fan. It generates almost no noise at all. There was no clicking, or whirring or high pitched whines, just the gentle whoosh of air that was faintly audible if I held my head to the case with the cover off. In addition to being nearly silent, the Seasonic M12 increased the airflow in my case enough that I was able to ratchet down drastically the fan speeds of both my CPU fan and my Case fan. In order to maintain stable temperatures before both fans had been running between 2100 and 2200 RPM. After installing the the M12, I was able to reduce the fan speeds of the CPU and Case fans to the 1800 RPM range and still see a 2~3 degree temperature reduction when using Prime95 to burn in the CPU. There was no real change to idle temperatures. Installing the M12 has been one of the best additions to my HTPC. In one fell swoop it reduced my CPU temperatures and reduced the overall noise of the case by allowing me to reduce the speed of other smaller and louder fans.

Note: While I have not experienced this, there are reports that once the 60mm fan turns on it will not turn off unless you turn off the computer. It will not ramp back down once cooler temperatures are achieved. I have not been able to personally verify this as I have not been able to get temperatures in my power supply high enough to enable the 60mm fan. Personally, I don't consider this too much of an issue as in the case of my PC overheating I would most likely shut the PC off anyways.

The Seasonic M12 was an excellent addition to my Home Theater PC. It has provided stable power without issue. The power supply itself is nearly silent and greatly increased the airflow in my PC case. A multitude of varied modular cables are included and allowed for the neatest wiring job my PC has yet had. Overall, it was an excellent addition to my PC. My biggest issue is the addition of the 60mm fan. This increased the size of the PSU beyond normal ranges and created a situation where I had to either mod my case or return the power supply, which was frustrating to say the least. I'd also like to see the issue with the 60mm fan not ramping down after the computer returns to normal operating temps addressed. For the price of this PSU, one of the more expensive 500W models on the market, I don't think it is too much too ask. Despite these minor shortcomings, I am extremely pleased with the performance, quality, stablity and near silent operation of the power supply. In these respects it has been nothing short of stellar.