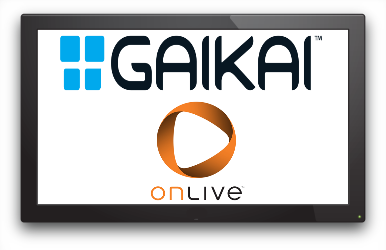 As Smart TVs have grown in popularity, we’ve seen manufacturers expand the capabilities of Smart TV apps beyond streaming music and video to allow for accessing social media, browsing the web, and even some minor gaming. However, at E3 this year, it became increasingly clear that offering console and PC-quality gaming is set to be the next big trend. The two big competitors in the game streaming market are Gaikai and OnLive.

OnLive was at CES in January to announce the inclusion of the their service in new Google TV devices. With LG hopping on the Google bandwagon for some of their smart TVs, OnLive is along for the ride. OnLive was at E3 earlier this week to show off their service on LG’s G2 series of Google TV-powered sets.

The LG G2 Series of smart TVs are powered by Google TV and equipped with LG’s new L9 dual-core chipset, along with a custom “user-friendly interface.” The LG Smart TV with Google TV will be the first Google-powered television to come preloaded with OnLive’s on-demand cloud-based video game software.

Meanwhile, Gaikai was in LA to show off their service on Samsung Smart TVs. Gaikai is approaching the Smart TV market in a somewhat different manner than OnLive. While OnLive is offering an app that leads directly to the company’s own service, Gaikai is teaming with TV manufacturers to provide the backend for manufacturer-branded gaming services. Gaikai, which is already available on LG TVs via the LG Cloud Gaming service, will be powering the Samsung Cloud Gaming serivce later this summer. SCG is expected to be available for Samsung 7000 TVs and downloadable through Samsung’s Smart Hub app store.

But now Gaikai is taking the fight to the TV. Partnering up with Samsung and LG, Gaikai, with the help of video card power house Nvidia, will be powering cloud gaming stores for Samsung and LG Smart TVs.