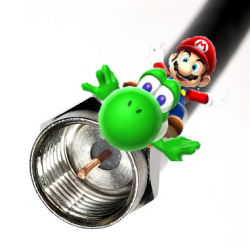 For many, there is a growing sense that in the future, all media will be streamed over the Internet. Indeed, most of us who got into HTPCs early on did so specifically because a PC is the single most flexible device for tapping into any streaming service. Video games represent one of the last great hurdles to the total IP streaming living room. Gaikai and OnLive are two companies that have stepped up to take on the challenge of bringing streaming gaming to the home, and despite OnLive’s recent woes, the two companies may be facing some stiff competition in the near future. Your friendly, neighborhood cable company may well be looking to move in on the still nascent game streaming market. With increasingly capable settop boxes already in use and with a more direct connection to subscribers’ homes than companies like GaiKai and OnLive, the cable companies will have some serious advantages in making a game streaming service successful. With the right selection of games and a capable enough service, the cable companies could even turn the screws on traditional game consoles.

Your modest cable box may soon serve as a game console that can stream high-end game content running on powerful remote servers. That’s according to a Bloomberg report that says AT&T, Verizon, Time Warner Cable, Comcast, and Cox Communications are all in talks to bring streaming game technology to their subscribers.