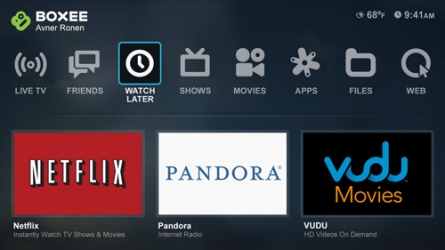 Team Boxee has announced that version 1.5 of Boxee is now available for PC/MAC/Ubuntu and is being tested by Early Access users on the Boxee Box. Unfortunately, Team Boxee is also announcing that Boxee 1.5 for Desktops will be last version released for computers. Going forward, all of Team Boxee’s attention will be devoted to the Boxee Box. As if to emphasize the point, the blog post in which the news was delivered indicates that Boxee 1.5 for Desktops will only be available on the Boxee site through the end of January. Hopefully there are plans to let other sites host the download in the future.

Boxee 1.5 for Desktops will include all the interface polishing that the Boxee Box version will receive and reportedly brings the PC client up to about 85% of the functionality of the Boxee Box, but will not support any apps that require DRM or certification such as Netflix or Pandora, and also will not support Boxee Live TV.

This 1.5 release will be the last version of Boxee for PC/Mac/Ubuntu. It will be available on Boxee.tv through the end of January.

We believe the future of TV will be driven by devices such as the Boxee Box, Connected TVs / Blu-Rays and 2nd screen devices such as tablets and phones. While there are still many users who have computers connected to their TVs, we believe this use case is likely to decline as users find better alternatives.

While Boxee for Desktops users will be happy to finally receive an update, this is still disheartening news, particularly given that Avner Ronen’s June post about the fall update coming to PCs seemed to suggest that the plan was to not only continue PC support, but keep it more in line with Boxee Box releases. Is Team Boxee right that there is not a place for software like Boxee on PCs in the future?

–Release Notes after the break–

Boxee 1.5 for Desktops bridges the gap from the previous desktop version (version 0.9) and enables various features on the PC that have so far been available only on connected devices.

While we have tried to maintain app compatibility between the Boxee Box and the desktop client versions, there are some cases of incompatibilities caused by either security restrictions or by unique platform behavior. Some apps work on one platform but not on other.