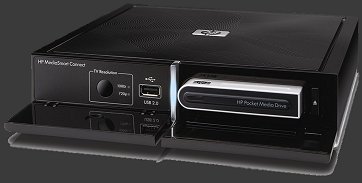 The folks over at EngagetHD have a picture gallery up of the slick looking HP MediaSmart Connect extender. It can be a DLNA compliant extender for just about any source, or it can be an Media Center version 2 extender. It’s a sexy beast, and also subject of the upcoming webinar HP and Microsoft are holding. Our very own Missing Remote staff member Mike Garcen (aka ShadyMG) will be on the panel of experts, along with some other well known Media Center bloggers like Ian Dixon from The Media Center Show podcast, Ed Bott from ZD Net, and Patrick Norton (best known from The Screen Savers on the now long defunt TechTV network).