Mike has graciously invited me to write a blog for MissingRemote and while I do intend to tackle some technical aspects of home theater in general and HTPCs in particular, I thought it might be useful to explain at least how I think I got into home theater.  After all, HTPCs, plasma display panels, and digital television are just a means to an end.

My first experience with what would become home theater was when my parents subscribed to ON-TV.  In suburban Detroit, where I grew up, an independent television station WXON carried ON-TV.   For the princely sum of $22.50 per month (back when $22.50 was “real” money) my family and I enjoyed uninterrupted and uncut movies and local sports for a few hours of each broadcast day.  ON-TV was delivered by a little UHF antenna installed on the roof, a cable that ran down the side of the house, and to a small converter box that sat on our 19” TV in the living room.  The box was not remote controlled and the box had a small speaker on it to provide the sound–no stereo, just beautiful monaural audio.

A few years later, Tribune United came and wired our city for cable.  It was a state of the art dual cable system and for about $30 per month, my family had 50 or so channels plus a subscription to Showtime.  Around the same time, my father won a VHS VCR (a nice front loading model Hitachi model with four heads and a wired remote control) and my family and I spent a small fortune on blank tapes to record movies off of Showtime.  Later, the local Meijer (think Wal*Mart SuperCenter if you live outside of Michigan) opened a small video store where the video arcade used to be and we began to purchase and rent movies there.

During my senior year of high school, I took a vocational education course on television production.  Since I was in the Industrial Electronics class the year before, I was allowed to hang out with the cable company engineer (the studio was provided by the cable company in return for the franchise rights) and help him maintain the studio (calibrate the cameras, etc.)  I also learned about the many aspects of television production including camera work, technical direction, audio mixing, and editing.  The studio had new Sony U-matic SP ¾ inch tape recorders and it was my first taste of what real “broadcast quality” looked like and how inferior VHS was.

The Search for The Perfect Picture

After high school and a brief working stint at college, I landed my first real IT job and being something of an A/V geek, I subscribed to Video Review magazine and saw some of the early home theaters.  I also had my own TV and a SuperVHS video recorder (I would never settle for plain old VHS once I saw U-matic) and while the increased resolution and stereo audio of SuperVHS made the stuff I recorded off of cable look and sound better, it did nothing for the movies I rented or purchased as very few, if any, titles were released in the SuperVHS format.  I needed something else; I needed the best video source available, and that was LaserDisc.

LaserDisc was not a new format at that time, but the development of the Compact Disc (CD) provided the new players a way to deliver CD quality PCM stereo sound (this was before the advent of Dolby Digital) and the highest resolution possible.  At this point, a video snob was born.

The Search Leads to the Unexpected…

So I began renting and purchasing LaserDiscs.  Luckily, I had a small video store named “Thomas Video” that rented and sold LaserDiscs and soon I upgraded to a 27-inch RCA ProScan Television and a Pioneer Dolby Surround Receiver.  I had what was at the time, a very nice system.  Long before the development of the DVD, I was watching movies in the correct letterbox format and in Dolby Surround.  LaserDiscs also pioneered (pun intended) something we all take for granted in the modern DVD and Blu-Ray discs, supplemental materials.

As I had mentioned earlier, I took a television production class in high school, and I did (and still do) have a strong interest in the production of movies and television.  Some of the best quality LaserDiscs were from “The Criterion Collection” and these movies all had supplemental materials such as running commentary on one of the analog audio tracks. They also had essays that were displayed with the very crude interactive functionality that was part of the LaserDisc standard.  I spent many a late night rhythmically pressing the frame advance button on my remote control reading (and granted this was on an NTSC standard definition display with interlacing) the essays found on those discs.  For someone with my interests, this was truly nirvana and an early glimpse to what was to come with DVD and Blu-Ray. 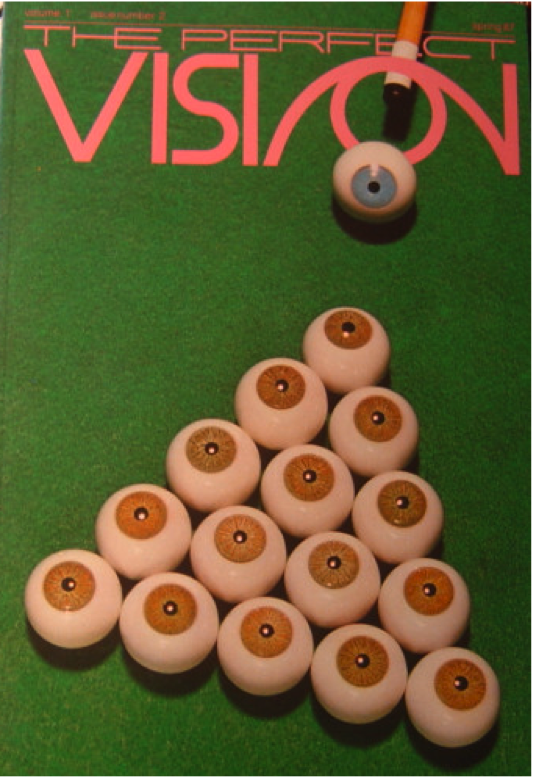 I also started reading “The Perfect Vision,” a bi-monthly magazine that was produced by the publishers of an audiophile magazine, “The Absolute Sound.”  This magazine further peaked by interest in movies and the technical aspects of reproducing the audio and visual experience at home.  The magazine also interviewed people involved with the preservation of older movies and re-mastering them for both the existing analog formats and the digital high-definition formats to come.  The Perfect Vision also introduced me to the work of Joe Kane and soon I ordered Mr. Kane’s first home video calibration disc, “A Video Standard” and then promptly spent a few weekends calibrating my ProScan television to get it as close as possible to what I remembered the production monitors looked like back at the studio.

Get Back to Television…

During this time, I upgraded from analog cable to what was then the new DirecTV/USSB Digital Satellite System (DSS).  Back then, DSS was using a high bit-rate modified version of the MPEG-1 compression system used for VideoCD and to be honest, I did have buyer’s remorse at the time as I found the motion artifacts caused by MPEG-1 more annoying than the noise that was typical of an analog cable system at that time.  My remorse was soon cured when DSS upgraded to the MPEG-2 system and the difference was stunning, but the old problem remained.  SuperVHS could not capture the quality of a DSS system and there was no easy way to sync the VCR and the DSS receiver up.   Recording a program meant manually tuning the DSS receiver, manually programming the VCR and then hoping nothing went wrong in between.  I needed another solution.

I was out shopping one day and came across this device called a Personal Video Recorder (PVR) from a company I had never heard of called Tivo– the premise was intriguing.  Instead of dealing with VHS tapes, this PVR device converted the video to MPEG-2 digital and then stored it on a hard disk.  It also had a 14-day guide and I could pause and rewind live TV.  It could also suggest new programming that I may like based on what I had already recorded.

I bought it right then and there and hooked it up.  I even figured out how to connect the Tivo to my Sony DSS receiver with a serial cable.  My problems were solved, at least for a little while.  I had the system I wanted, it did what I wanted, but boy was it complicated.  And with a new girlfriend (and future wife) around, what was OK for me to use suddenly seemed needlessly complicated and prone to failure.  I needed to flatten this system out, automate it and make it less complex and more reliable.  Plus, I needed more storage than even a modded Tivo could provide and there was this new High-Definition stuff.

I needed another solution…