For more than a year enthusiasts in the Home Theater PC (HTPC) community have known Ceton as the Kirkland, WA company that delivered the first true PCIe, and until recently only, Digital Cable Tuner (DCT) available on the market.  Discontent to sit out the recent, relative glut of CableCARD devices and form factors they have introduced a new external USB member to their four tuner product line with planned availability on September 19th — aptly named “InfiniTV 4 USB.”  We recently reviewed two similarly external CableCARD tuners from Hauppauge and SiliconDust which entered the market ahead of Ceton, but time to market is only part of the equation as both devices have struggled with maturity; so the real question is if Ceton’s experience in the field can provide the same quality of experience we have come to expect from their earlier device.

Measuring 13.5cm x 18cm x 2.7cm (including feet) and weighing around a pound, the Ceton InfiniTV 4 USB has a solid feel and heft that provides an uncommonly rewarding tactile experience even with significant venting providing a geeks-eye view of the internals.  The review sample shown above is not exactly the same in appearance as the retail units, mostly because it is missing the “infiniTV” logo on the front, but also shows some minor blemishes (or so I’m told as any unsightly marks proved elusive) on the chassis and the feet will be slightly different.  Retail units should have the same quality materials however, because even though the case is a matte black plastic, it is clearly not the “budget” kind found on most consumer level devices.    There is one status light, a solid blue LED when everything is functioning properly, which is muted enough to not prove distracting even when placed in clear view.  Most users probably will not put the device on display however, preferring a convenient location within the A/V cabinet, but unfortunately mounting options are limited because screw holes are not provided.

Driver installation was a straightforward click-through exercise with no real decisions required except whether to reboot when finished or to wait for a more convenient time.

As was noted in the first look, getting the tuner recognized and working inside of 7MC was a breeze.  Assuming that the PC has already passed the Digital Cable Advisor, it only requires your zip code, a phone call and some button presses to get four tuners of CableCARD goodness pulled into the application.

Should the need to troubleshoot arise, Ceton includes a handy 2’ diagnostic tool that provides access to a more detailed view of activation and entitlement status.  The tool is also handy for those fortunate enough to have a benevolent Cable provider blessing them with Copy-Freely content because it lists the CableCARD and host IDs required to pair the m-card with the DCT before use with applications like SageTV or MythTV.

For those more inclined towards 10’ use, Ceton is planning to release the same diagnostic capability in a 7MC add-in in the near future.  The screenshots above are from a pre-beta release of the add-in so please do not take it for gospel, as some things may change; it is a significant step toward providing a seamless user experience especially for the curious or less technically inclined.

The tile for “network tuners” was not included in the galley above mostly because it warrants a more detailed discussion as a topic, but also because it is not beta.  While DCT are inherently UPnP network devices, up to this point only the SiliconDust HDHomeRun PRIME has fully embraced that reality and forgone the need for a PC host.  Because of this, both of the InfiniTV 4 models must have their network interfaces, which exist on a different subnet and are only routable through the PC interfacing with it, bridged with the host’s network interface card (NIC).  If this sounds complex, that’s because it is–but only a little.  Fortunately Ceton has made the process completely wizard-driven from within 7MC, so if all of the PCs that will host and use the InfiniTV 4 are running that platform all of the individual steps are taken care of for you.  Getting the host setup on another OS, like Windows Home Server (WHS) 2011 (check out the last two screens which show it working from WHS), is more involved but we have a guide for that :).  Everything is the same between the two models except the need to check the box to enable bridging on the USB device’s driver configuration page.  Once complete on all of the systems, the bridged tuners function seamlessly on the clients, but this is an area where the PRIME has a significant advantage because unlike the Ceton devices, which only offer static tuner assignment, SiliconDust provides the option for a more flexible approach (with some caveats of course), and without the host there are fewer moving parts to potentially break as well as a lower electric bill.

Those with concerns around USB 2.0’s ability to handle the bandwidth demands of four simultaneous HD streams should be able to put those worries to rest with the usage (50Mbps) measured during monitoring being far enough below the protocol’s theoretical maximum of 480Mbps that even if the actual limit were only half that, it would still provide enough headroom for multiple InfiniTV 4 USBs.  Like all DCTs, the device is exposed via a network interface to the OS as well as presenting a web based interface launch-able from Windows Explorer for viewing additional diagnostic data (like signal level and signal-to-noise ratios) for those with issues or just wanting to poke around. 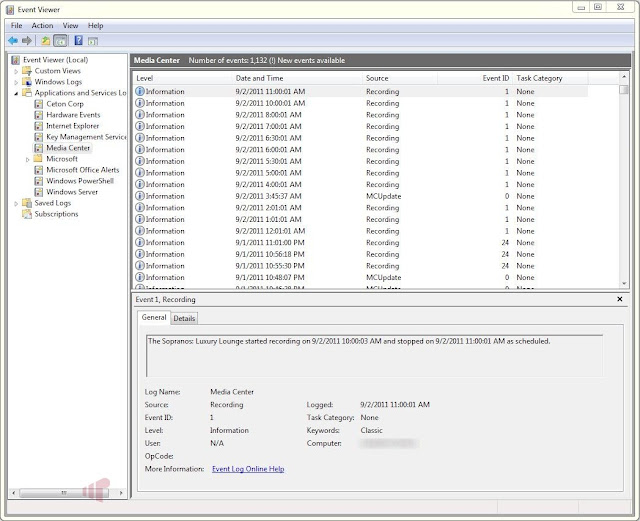 Fancy plastic and a slick software ecosystem only gets a product so far, after all it does not matter how easy a device is on the eyes or in use, if it is not reliable – this is especially true when it comes to TV capture devices with Household Acceptance Factor (HAF*) on the line.  On this point, the Ceton InfiniTV 4 USB was a source of frustration for me, because as hard as I tried to break it – including a plethora of configuration permutations including: single 7MC PC, 7MC host + multiple 7MC clients (both physical and virtual utilizing 32-bit and 64-bit OS) and a WHS 2011 host with multiple 7MC clients — the device was able to perform several 24+ hour, 4x HD, simultaneous recording sessions without issue.  Upon reflection, perhaps this is not so much a personal failure as an artifact of the tuner’s heritage, because even though this version of the product is “new,” it shares most of the moving parts with the PCIe revision inheriting its maturity as well.

Channel change speed was varied within a range of three to seven seconds, but most took between four or five seconds to complete so just a little slower than the HDHomeRun PRIME.  Usability from standby was significantly worse however, with the tuner requiring 60-80 seconds to present data after resuming from S3.

* Yep, a new term combining W[ife]AF/H[usband]/S[pouse]AF/K[id]AF/S[ignificant] O[ther]AF into one, easy to use, encapsulation 🙂

For SageTV users fortunate enough to have their cable line-up marked “Copy Freely,” SageDCT supported the InfiniTV 4 USB with no modifications.  Observant readers will have already noted the coexistence of USB and PCIe versions in the screenshot above, so a slight change was made (bumping the version to 1.6) to create static links between specific tuners and the associated network encoder to ensure that testing was accurate. 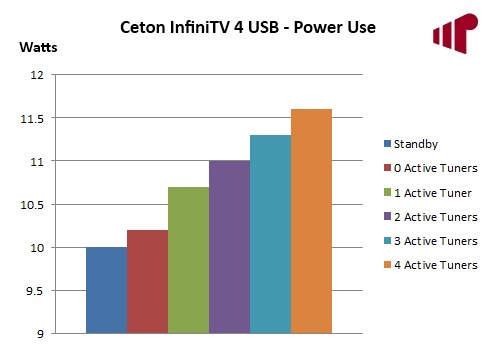 Power use was higher than expected with the device pulling 10.2 watts (W) even with no tuners active. Consumption ramped from there to a peak of 11.6W when fully taxed.  While there is a small reduction in draw (0.2W) when the PC is in standby, it still pulls ~10W in that state so there is significant room for improvement.  After viewing the power numbers, it comes as no surprise that the InfiniTV 4 USB gets warm.  Ranging from ~43°C to a 51.8°C (125°F) peak temperature measured during one of the stress tests, leaving the device somewhat uncomfortable to touch.  I was assured that anything less than 65°C is normal, and given the stability exhibited even in that condition it is safe to take Ceton at their word.

With the recent introduction of DCT from SiliconDust and Hauppauge providing different form factors, tuner counts and discrete price points it is refreshing to see that Ceton is not content to sit still – extending the InfiniTV 4 line beyond a single [PCIe] product to include a USB external device. Also capable of delivering four HD streams the two members of the family share many features including an MSRP of $299; with the interface being the only clear differentiator once we pass the September 19th availability date.  Except for some nitpicks around power consumption and heat, the Ceton InfiniTV 4 USB provides exactly what it promises – simple, stable, premium digital cable in the HTPC.

Thanks to Ceton for providing the InfiniTV 4 USB review sample.