We have reviewed a number of wireless keyboards over the years, from the tiniest Logitech Dinovo Mini to the oblong shaped IOGear GKM581R. Every wireless keyboard has its pros and cons based on what exactly you are looking for and how often you will use it. Genius is a relative newcomer to this world and are coming in with a full featured, no compromises LuxeMate T810 Media Center keyboard. Offering virtually complete keyboard support with an included touch mouse the T810 is aiming to be your full time HTPC keyboard of choice, but is it too much for what you need?

Let’s take a look at the technical specifications according to the Genius website.

Some items of note that we will expand into later–there are a lot of RF-based 2.4GHz devices, all claiming 40’ of range, so how does the keyboard adapt to interference? Also, the “OptoTouch” technology used for the integrated mouse is unique and different, but how well does it work for precise control?

The Genius LuxeMate T810 keyboard arrived in a rather large box and when opened it showed the box and keyboard were larger than I had initially expected. It utilizes a standard full size keyboard in the middle, and then it has rubber grip on both sides which feature a number of Windows Media Center hotkeys. I should mention an odd part on the part of Genius marketing (no pun intended) in regards to the keyboard, documentation and website which continuously mentions “Support for Windows XP Media Center Edition.” If that strikes you as a bit odd for a brand new keyboard, you’re not alone–after all, Windows XP MCE was released in 2005 and this keyboard while first shown at CeBIT 2009, only recently released it’s launch in April 2011. Of course the keyboard was tested and worked perfectly fine in Windows 7 Media Center (7MC) however it was still quite odd to see XP plastered all over the specs and websites for a brand new product.

Continuing on some items I was not a fan of with the Genius LuxeMate T810 is the lack of rechargeable batteries. The keyboard runs on two standard AA batters (included) and it does put itself into sleep when not in use. For a keyboard being sold for around $64 however I would have appreciated either rechargeable batteries or at least a battery indicator. There is no On/Off switch so keep that in mind if you keep the keyboard anywhere where accidental presses may occur as they could add up to drain the batteries. As with all keyboards without an on/off switch the keyboard does require movement of the mouse or keyboard press before initially waking up.

As for the layout and comfort of the keys themselves it was very good. The Genius LuxeMate T810 keyboard is one of the largest wireless keyboards I have ever used which make typing on it incredibly simple. For the most part the keys are in the normal layout location and even F-keys have their own keys. There is some adjusting required however as some of the keys are placed along the right of the keys, so if you are used to the ENTER key being on the far right you may have some accidental presses while you get familiar with this design with the Home/Page Up/Down/End buttons alongside the right of the keyboard. Tactile feedback from pressing keys is on par with what you would experience from a normal keyboard, which is to say it’s far from silent; given that you will be the one typing this probably won’t bother you in the home theater environment.

On the lower right of the keys are the arrow keys–an odd placement in that the position is not standard nor all that comfortable to access for remote control usage (for typing it’s ok). Given the focus on Media Center functionality and the focus on using this keyboard in that application it was an odd omission to not have the arrow keys–arguably the most used control buttons–more prominently situated. There’s plenty of space on both side grip spaces so I would have liked to see directional keys there instead.

Speaking of the rubber grips, they are fairly comfortable to hold although they do add a fair amount of heft to the T810’s overall weight. At first glance of the keyboard there is a striking resemblance to the old Microsoft Wireless Keyboard which was arguably the worst keyboard I had ever used (the lesson was learned, IR is not the right way to go for wireless typing)! Fortunately the style was the only similarity to that unit and it actually makes operating on your lap very easy.

The left side grip of the Genius LuxeMate T810 contains your standard play/pause and other media control and volume buttons, along with the expected left and right click mouse buttons–with the touch mouse on the right side grip having the clicks on the opposite side is a must for easy operation. What baffled me about the placement (and honestly had me cursing) was the placement of the POWER and SLEEP buttons, which are placed directly below the left click button. So while operating the unit without looking at the keys, on a number of occasions I accidentally hit the power off button instead of the left click, and then had to walk up and power my system back on–maddening to say the least! Why Genius decided to put these buttons on the keyboard at all is odd, and even worse why they placed them in such a prominent position.

On the right side things are much better configured, with all the standard Media Center hotkeys you have grown accustomed to from your standard remote control–direct keys to Recorded TV, Music, Guide, Videos, Start, etc. The real unique part of the right side, and of the keyboard in general is the OptoTouch mouse sensor which is a small round object placed at the top of the right side grip and acts as your pointing device. It is most similar to the old eraser head mouse however works significantly better and faster, but does take a little bit to adjust to since it is somewhat sensitive. I would not prefer this over a trackball but it’s definitely unique and won’t require any cleaning. 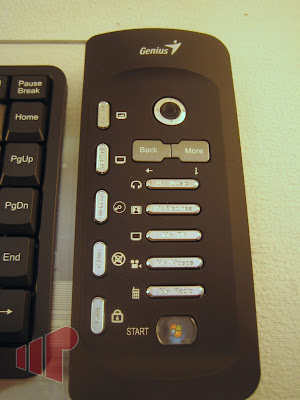 Similar to other wireless keyboards the Genius LuxeMate T810 utilizes the 2.4GHz radio frequency spectrum to communicate with the HTPC. This allows for an advertised range of 10m (approx. 33’) and I tested this in an environment with a number of devices to see how capable. My apartment is not 33’ in the same room, however I tested through open doors and for the most part performance was on par with what I have seen from other keyboards, and should be more than enough for most living rooms where your HTPC reside.

Not surprising but worth noting is the lack of any programmable buttons–so using the keyboard as your full time control duty will still require the remote controls to power on/off your TV and AVR. Also there is no customizing any of the buttons on the keyboard themselves such as quicklaunch an application. While this really isn’t necessary for Media Center functionality as most buttons are included, it would have been nice to have a few unique keys I could program to launch a web browser or other utility I use frequently on my HTPC.

The last item I will mention is the lack of backlight function, which made using the keyboard in the dark a bit trickier. The silver buttons on the sides do seem to reflect a bit more in low light areas but even the slightest lighting would have been appreciated.

I am conflicted when looking back on the experiences with the Genius LuxeMate T810 wireless keyboard and mouse solution. On the one hand the keyboard offers a plethora of buttons and controls as well as 34 hotkeys for Media Center functionality making for a convenient keyboard. On the other hand I find myself wondering how useful these keys are in the environment considering you have a remote control, and also that the inclusion of said buttons make this one of the largest wireless HTPC keyboards on the market. At weighing nearly 1.7 pounds with batteries you will definitely prefer to use this on your lap than in mid-air. If you type often however you will be grateful for the size and tactile feedback from the keys which won’t cram your hands. At a price of $64 it’s a fair price placing it in the middle of keyboards on the market and based on your needs could be the right solution.

Thank you to Genius for providing the review sample.