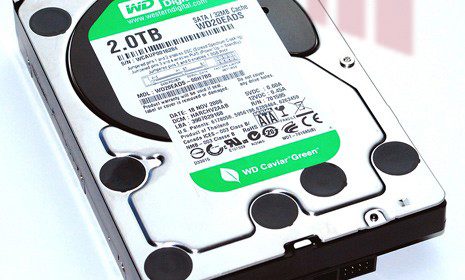 Most people will ask, “do I really need an AV based hard drive?” That is a tough question. One item you need to look at is how you use your DVR or HTPC. Do you run your setup 24/7/365? Need the hard drive as quiet as possible? Run cool? If yes for all those questions the Western Digital AV-GP might just be what you are looking for. An important consideration when discussing DVR’s is they do in-fact run without powering down regularly, as it needs to be always ready and waiting to record your next tv show or movie.

The AV-GP line of Western Digital hard drives is mainly geared towards digital surveillance systems, but once you look at what they do you see they are a perfect match for DVR solutions.  Since they are based off of the WD Green Power hard drives they are low power, low heat and low RPM (think noise), which is great for a DVR and longevity.

Quiet – Noise levels have been optimized to less than one sone* – virtually below the threshold of human hearing.
* A sone is a subjective unit of loudness as perceived by a person with normal hearing.

SilkStream™ – Optimized for smooth, continuous digital video playback of up to twelve simultaneous HD streams. SilkStream is compatible with the ATA streaming command set so CE customers can use standard streaming management and error recovery options.

The Western Digital AV-GP is optimized for recording audio and video for use in devices like DVR/PVR, Home Theater Computers and Video Surveillance systems. The AV-GP drive has a specialized firmware on the drive that is setup specifically for recording video which is not found on normal retail hard drives.

The Western Digital AV-GP is a drive that while it looks like a normal drive, is optimized for large and continuous sequential write operations. As a result it allows users to record multiple HD streams on a single drive.

While there is nothing special about the hard drives’ form factor visually, everything about these drives are special firmware wise on the drives. When these drives arrived the first thing I did was install them into my bench testing HTPC. I received two identical hard drives, so I RAID-ed them together.

I installed my Ceton Corp Infinitv4 along with my Silicon Dust HD Homerun tuners with my bench  HTPC setup. My goal in this review was to see how many HD video streams I could record at the same time. In my initial testing I was seeing dropped frames and pixelation when I recorded more than 4 HD streams at once. After some research and troubleshooting I came to the conclusion that the onboard raid of the Zotac board wasn’t working correctly. I took the drives out of RAID and used a single drive for the test. After going to a straight drive with no RAID I was easily able to record all 6 HD streams at the same time without issue.

This review was one of the harder reviews I have had to do: while I can swap in a new hard drive and start recording HD, trying to figure out how to test this drive to make sure it is doing what it says it can do was a bit of a challenge. While I could run these drives through performance applications that test its disk transfer rates, like Disk Winmark and the like I figured I would give it the “real world” test and throw it into my HTPC and put as many tuners as I could. While I only had 6 HDTV tuners (4 Ceton cable card, and 2 ATSC Silicon Dust HD HR) I also had 4 NTSC SD tuners I decided to throw into the mix.

After I installed the 4 NTSC SD tuners, I had a total of 10 video streams recording all at once. The 10 streams were roughly 110 to 120 mbps to the hard drive sustained. I had absolutely no issues recording 10 streams at once.

6 HD streams recording at once

While not everyone may need to record 6 HD streams, and an additional 4 SD streams at once, knowing you have the hardware to back it up is a great thing. Having a reliable and reputable hard drive to accomplish those tasks is what I’ve come to expect from Western Digital. I’ve been using WD hard drives for years and having the chance to review a specialized hard drive like this was a  pleasure. Like I explained before I might not have been the best choice to review this from an extremely technical perspective, but a more “real world” view point might just be what was needed in this case and 10 tuners did just that.

While I can’t comment directly on reliability of this drive in particular as I didn’t have a chance to use it year in and year out I would still trust WD as they have always made reliable hard drives that I have been running for years. While my anecdotal evidence can’t speak for everyone I am sure there are plenty of users that can definitely speak on Western Digital’s behalf.

In the end if you are looking for a drive that can keep up with your digital video needs, the Western Digital AV-GP line of hard drives just might be what you need.